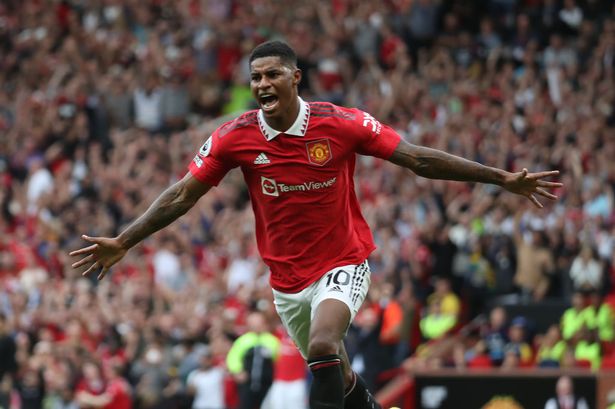 According to a report, Marcus Rashford of Manchester United is anticipated to be healthy for the Premier League matchup against Manchester City on Sunday. During the 2021–22 season, the 24-year-old lost his scoring touch under Ole Gunnar Solskjaer and Ralf Rangnick, and a summer transfer was discussed.

In the end, Erik ten Hag decided to stick with Rashford since he has performed well in the number nine position while Anthony Martial is out with an Achilles injury and Cristiano Ronaldo is still unpopular.

The England international has contributed to three goals and two assists in his first six Premier League matches, but a hamstring injury has prevented him from playing in either of his team’s Europa League matches against Real Sociedad or Sheriff Tiraspol.

Rashford’s injury prevented him from being selected for England’s squad to face Germany and Italy in the UEFA Nations League in September. Rashford’s absence from Man City’s visit to Old Trafford on October 2—which will be Man United’s first Premier League game since defeating Arsenal 3-1 on September 4—raised concerns right away.

Rashford, according to The Sun, is “winning his battle” to overcome his issue and may be prepared to lead the line this weekend against the English champions. According to the source, the Englishman has since resumed training and is feeling rested ahead of the arrival of Pep Guardiola’s team, with Man United looking to make it five straight victories in the Premier League.

Rashford all ready for Manchester derby

In 309 games while wearing a Man United jersey, Rashford has accumulated 96 goals and 60 assists, and England manager Southgate has been heartened by the striker’s recent upswing.

“There were certain players we wanted to keep involved this time, but that said it doesn’t mean that this is the end for some of the others who aren’t involved,”

“Marcus Rashford, for example, has shown some encouraging signs recently. He is a player we know well so if he can perform at a high level in the next few weeks, he of course will be under consideration.”

Rashford might be healthy enough to play on Sunday, but Man United are still dealing with a number of other injuries. Harry Maguire is said to have hurt his hamstring during England’s 3-3 Nations League tie with Germany on Monday.

On another troublesome night, the 29-year-old was responsible for Die Mannschaft’s first two goals. It has been suggested that he may be out for a few weeks after playing through pain at Wembley.

However, after Maguire was benched following Brentford’s 4-0 loss in August, Ten Hag would have been expected to stick with the Raphael Varane and Lisandro Martinez partnership.