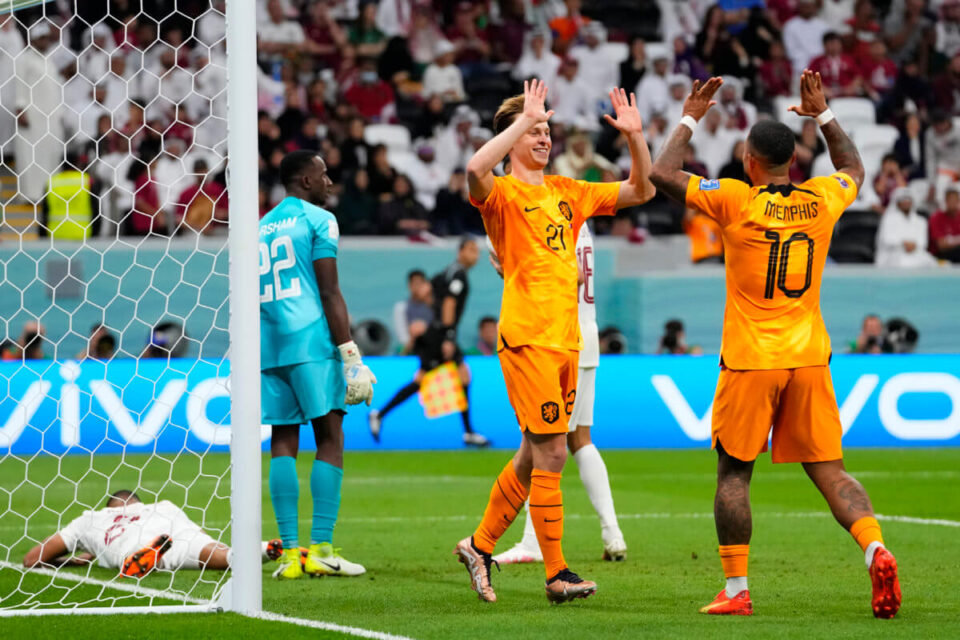 Netherlands defeated Qatar 2-0 in the Al Bayt Stadium to easily advance to the round of 16 of the World Cup. No matter what happened between Ecuador and Senegal, the three-time runners-up knew that defeating the tournament’s hosts would guarantee their position in the final rounds.

But thanks to goals from Cody Gakpo and Frenkie de Jong, Netherlands finished first in Group A and will now face the Group B runners-up on Saturday after Senegal defeated and eliminated Ecuador.

The Netherlands quickly started to exert pressure on their adversaries, with Daley Blind being the first to force Meshaal Barsham to make a save from a tight angle.

The hosts were troubled by Oranje’s rapid exchanges in the last third of the field, and Memphis Depay was the next to go close, volleying over the crossbar after benefiting from a ricochet.

Qatar was still having their moments despite Netherlands’ dominance, and after a string of corners, Abdelkarim Hassan volleyed the ball over the crossbar.

The in-demand PSV Eindhoven forward received a short pass from Davy Klaassen, took a touch, and sent a low shot into the bottom corner from 16 yards out to score for the third game in a row. However, that galvanised Netherlands back into life.

After a weaving run by Ismaeel Mohammad, Qatar made an urgent effort to retaliate, but the rest of the opening session lacked the urgency that existed before the goal.

The Netherlands were already moving on as group champions after Senegal’s victory against Ecuador in the previous game, but they stayed focused and quickly increased their lead after the interval.

Depay’s close-range shot was brilliantly blocked by Barsham, and De Jong raced quickly to push in the rebound from just a yard out.

After an hour, Louis van Gaal substituted Klaassen and Depay since the Netherlands had complete control of the match. Their replacements, Steven Berguis and Vincent Janssen, believed they had added to the Netherlands’ lead.

Although Janssen set up Berghuis for a simple tap-in, a handball by Gakpo during the buildup resulted in VAR’s timely intervention.

While the other game was experiencing drama, this one was teetering to a predictable end, which suited Netherlands as they attempted to maintain their energy levels.

During the six minutes of extra time, Berghuis’ bad luck persisted as the playmaker saw a gorgeous curling effort strike from the edge of the box hit the crossbar with Barsham clearly outmatched.

However, in the big scheme of things, it was just a slight disappointment because his country had set up a match with either England, Iran, the United States, or Wales in the opening round of the last-16 at the weekend.

Brazil’s Neymar suffering from illness alongside an ankle injury