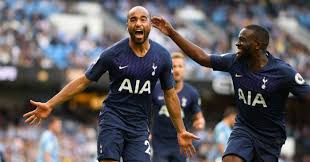 Spurs picked one critical point vs Manchester City in an away game in the Premier League. Although Man City managed to draw first blood through majestic Sterling in the 20th minute, it was shortlived as Lamela leveled things for Tottenham. Aguero netted City’s second goal of the match, but it was marred by the ugly showdown with manager Pep.

Coming from the bench, Lucas Moura turned the scoreline two-two. Eventually, Jesus tried to seal three points for the Sky Blues – but VAR played spoilsport snuffing out the match-winning goal.

Nevertheless, this draw could be a great pump up for Pochettino in terms of bagging his maiden Premier League title.