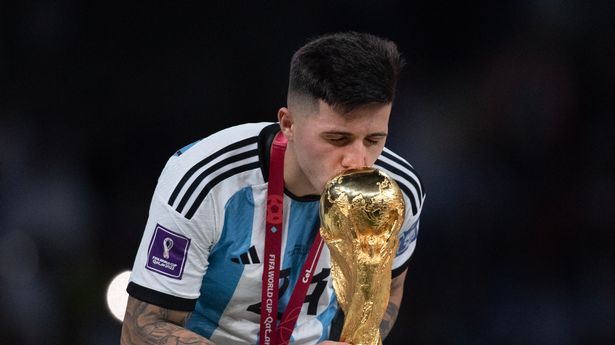 According to reports, Chelsea and Benfica have reached an agreement for Enzo Fernandez to join them for a record-breaking £112 million transfer fee. Numerous elite European clubs have expressed interest in the 21-year-old midfielder after he won the 2022 World Cup with the champions Argentina and was named the tournament’s Young Player.

Fernandez has also made an impression during his brief stay at Benfica since joining the team from River Plate over the summer. He has made 25 appearances in all competitions so far this season, providing three goals and five assists.

Although the young player signed a five-year deal with the Portuguese powerhouses through 2027, manager Roger Schmidt recently acknowledged that the midfielder may have already played his final match for the team.

Last Friday, Fernandez participated for 89 minutes in Benfica’s 3-0 loss to Braga. When asked about the midfielder’s future following the game, Schmidt responded as follows:

“I don’t know if that was the last match of Enzo. I think Enzo is a great player. Since he arrived at Benfica, he’s played fantastic football. Also, as a person, he’s completely identified with the club.”

“Like I said before the match, sometimes things in football happen and then players have to make decisions. We will see what happens [in the] next weeks.”

According to a recent source, Fernandez has already signed a personal contract with Chelsea and has been persuaded to join Graham Potter’s team after informal discussions.

The West Londoners have reportedly moved one step closer to finalising a high-profile deal for the midfielder after agreeing to a €127 million (£112 million) fee with Benfica, according to Sky Sports Italia via The Mirror.

Enzo Fernandez on his way to join Chelsea soon

According to the source, the agreed-upon money would be paid in three instalments over the course of the following three transfer windows rather than in one lump sum and is marginally greater than the player’s €120 million (£106.4 million) release clause.

Chelsea, who have already spent more than £250 million since the summer, are understood to have agreed to spread out the total payment in order to comply with Financial Fair Play (FFP) regulations.

The Blues anticipate completing the transfer in the “coming days” and appear to have outbid clubs like Liverpool, Manchester United, and Real Madrid for his services.

Fernandez is not the only newcomer on his way to Stamford Bridge; according to reports, Chelsea is also close to signing Monaco center-back Benoit Badiashile.

After the two clubs reached an agreement on a €38 million (£33.6 million) transfer fee, the 21-year-old Frenchman reportedly had his physical on Monday.

Andrey Santos, a promising young player for Vasco da Gama, is also nearing a permanent move to Chelsea, albeit the 18-year-old is anticipated to join the team’s academy.