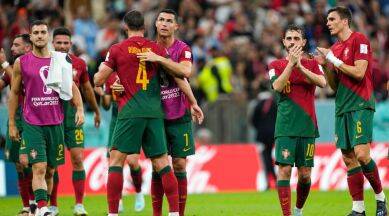 Portugal defeated Uruguay 2-0 at the Lusail Iconic Stadium to go to the round of 16 of the 2022 World Cup. The sole major opportunity came Uruguay’s way after eluding Portugal’s defence, but Rodrigo Bentancur was stopped by Diogo Costa’s quick reactions after a cagey first half produced very little chances.

A dangerous Fernandes cross found its way into the far corner of the net in the 54th minute, despite Cristiano Ronaldo’s allegation that he had a tiny touch on it.

Portugal was able to lift the ante in the second half, and their possession dominance was rewarded with a goal. After referee Alireza Faghani consulted with VAR and penalised Jose Maria Gimenez for a handball, the Selecao secured the three points after being given a contentious penalty in stoppage time.

With one game left, Fernandes took on the responsibility and did not make a mistake by sending Sergio Rochet the wrong way to guarantee Portugal’s spot in the round of 16. Both teams had opportunities to score in the first five minutes of the game, which hinted a thrilling second half of football was in store.

At the other end of the field, William Carvalho unleashed a wild right-footed volley that sent the ball soaring over the crossbar as Mathias Oliviera tried his luck with an ambitious but misguided effort.

After a few early chances, a cagey first half unfolded in which Portugal controlled possession. However, with goalmouth action proving to be scarce, Uruguay’s Bentancur had the finest opportunity of the first 45 minutes.

The Tottenham Hotspur midfielder pushed aggressively from the halfway line, then used quick footwork to evade the Portuguese defense’s charges. However, he was unable to get past the charging Costa, ensuring that there was no goal at halftime.

Portugal 2-0 Uruguay: Ronaldo and company register a spot in the round of 16

Joao Felix’s left-footed effort into the side netting in the 50th minute demonstrated Portugal’s strong attack intent to start the second half.

After Felix’s missed opportunity, Portugal quickly took the lead. At first glance, it appeared like Ronaldo had performed the strongest of headers from Fernandes’s frightening cross, but upon closer inspection, it was evident that Ronaldo had provided no help at all.

Diego Alonso, the manager of Uruguay, made several changes as their record of five straight World Cup group stage clean sheets came to an end in an effort to find a critical equaliser.

Maxi Gomez delivered a beautiful curling attempt from the edge of the box that thundered against the post, and Luis Suarez calmly directed his effort just wide when the ball broke to him in the box from a free kick. These two substitutes both immediately posed a threat.

Giorgian de Arrascaeta attempted to equalise in the 79th minute, but the dominant Portuguese goalie met him and made a fantastic save to hold onto the slim lead.

Gimenez accidently handled the ball as he fell down, and after consulting with the technology for a little period, the referee decided Gimenez’s violation was worthy of a spot kick, ending Uruguay’s hopes of rescuing a point from the game.

In order to throw Rochet the wrong way and roll the ball into the opposition corner, Fernandes did not display any symptoms of stress. Instead, he remained cool under pressure.

Portugal will concentrate on their match against South Korea on Friday, knowing that they have already qualified for the round of 16, while Uruguay must defeat Ghana to have any chance of progressing.