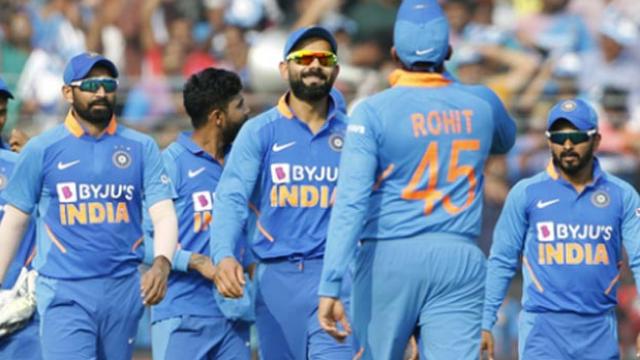 India won the third ODI match played at Barabati Stadium in Cuttack by 4 wickets with eight balls remaining. The match played between West Indies and India ended at a very exciting turn. The year, 2019, thus ended on a winning note for India.

For the record, this was India’s 10th successive bilateral ODI series win versus the Windies. Rohit Sharma (63) and KL Rahul (77) laid the foundation for what really was a tricky run chase. Thereafter, it was mostly Kohli (85 off 81 balls) at work. No team has chased a 300+ total in Cuttack before but the Kohli’s team made this score easily.

After winning the toss, Indian captain Virat Kohli decided to bowl first. West Indies set target of 316 runs to win in front of India. The Windies had scored 315 runs losing 5 wickets in 50 overs with the help of Nicholas Pooran and Kieron Pollard who scored 89 and 74 runs respectively.

India’s Rohit Sharma broke Sanath Jayasuriya’s 22-year-old record of scoring the most runs in a calendar year as an opener during this match. Before playing in the third and final ODI against the West Indies, Rohit was just nine runs behind defeating the former Sri Lankan player who added 2387 runs in the calendar year in 1997.

The openers who have performed brilliantly in one season include Virender Sehwag (2355 runs in 2008) and Matthew Hayden (2349 runs in 2003). He also topped the ODI as the highest opener in the calendar year by scoring 1490 runs.