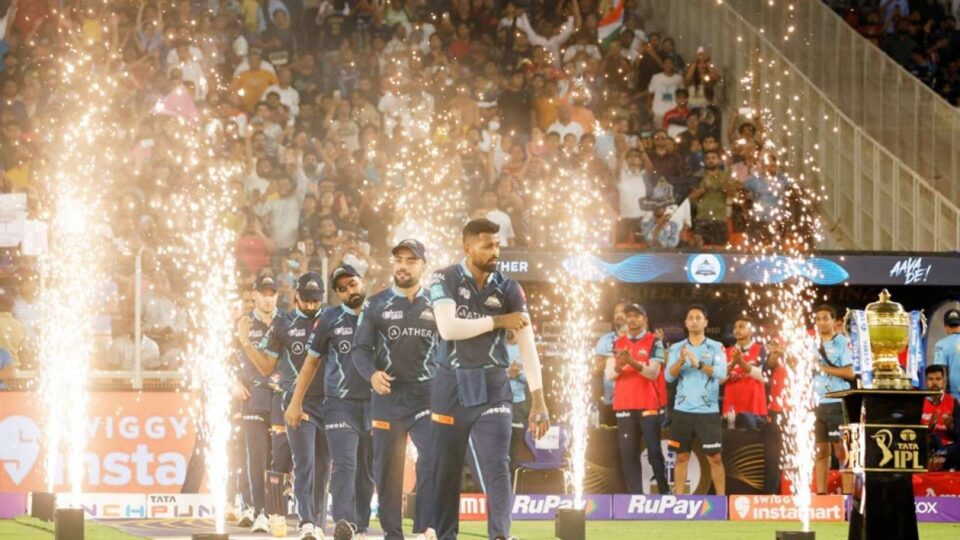 Gujarat Titans (GT) defeated Rajasthan Royals (RR) by seven wickets in the IPL 2022 final at the Narendra Modi Stadium on May 29, claiming their first Indian Premier League trophy and doing it in their maiden appearance in the event.

Sanju Samson, the RR captain, won the toss and chose to bat first. The Royals got off to a fantastic start to to openers Yashasvi Jaiswal and Jos Buttler, but they started losing wickets quickly after the powerplay.

Only Buttler appeared to be in control after reading the pitch until captain Hardik Pandya ordered him back to the dugout for 39 runs in the 13th over. Gujarat’s disciplined bowling performance limited RR to as low as 130/9. Thus, displaying an impressive bowling performance.

Hardik Pandya was the best bowler with 3/17 and R Sai Kishore 2/20, while Mohammed Shami, Yash Dayal, and Rashid Khan each took one wicket.

In response, RR came within a whisker of striking in the opening over, but Yuzvendra Chahal lost a sitter at forward square leg. That turned out to be a costly error, as Gill punished the Rajasthan bowlers and took sole responsibility for anchoring the Gujarat chase.

While the 2008 champions dismissed the top-order but Gill, along with David Miller, remained firm and added the closing touches. On 45 runs from 43 deliveries & 32 from 19 balls, Gill & Miller remained undefeated respectively to gift GT their 1st IPL trophy.

Trent Boult, Prasidh Krishna, and Yuzvendra Chahal all picked up one wicket each for Rajasthan’s bowling. Thus, GT became the 7th different IPL franchise to lift the IPL trophy and 2nd to win it in their debut season.

After the final match of the IPL 2022, the winning captain Hardik Pandya said

“This is the right example for any team in the world. If you can play as a team and build a good unit with genuine people around, wonders can happen. I and Ashu pa, we like to play proper bowlers. Batters can obviously chip in, but most of the time I have seen in T20 cricket – it’s a batter’s game but bowlers win you games.”

“Count myself lucky winning 5 finals, it’s been exciting. This is going to be a special one. We spoke about creating a legacy. Generation to come, everyone will remember this was the team who started this journey and to win the championship first year is very special.”

“This season was really special for us. Last two-three seasons all the fans, everyone was having a really hard time. Good to give them some happy moments. Really proud of my team. Great youngsters, great senior players. One off day today but really proud of my team. Right from the auctions we wanted to have quality bowlers, they win you tournaments.”

It was for the first time in the history of competition that a team had both the Orange & Purple cap holders but failed to win the competition.

Liverpool sets up a cut-price for their forward Sadio Mane