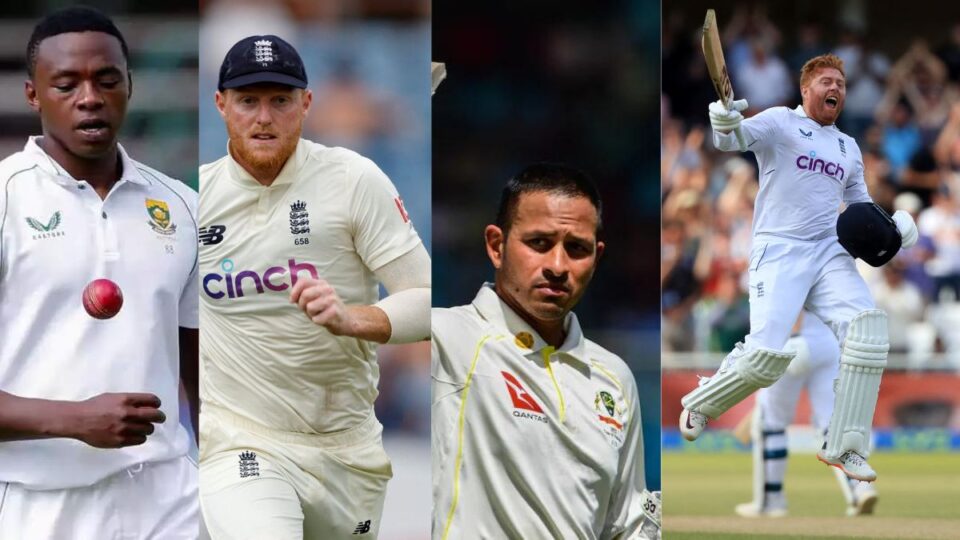 The candidates for the men’s Test Cricketer of the Year award 2022, which recognizes outstanding efforts in red-ball cricket, were released by the International Cricket Council (ICC) on Friday.

On this top list, which is dominated by two Englishmen, it is noteworthy that no Indian player received a mention. The explosive combo of Test skipper and talented all-rounder Ben Stokes and the powerful hitter Jonny Bairstow are among the English players.

Usman Khawaja of Australia, who will start the first Test match, and Kagiso Rabada of South Africa are the other participants in this group.

Unexpectedly, the top two run scorers in the longest format of cricket this year, Pakistan captain Babar Azam and England’s modern-day Test great Joe Root, are not on the list.

Stokes favorite to win the Test cricketer of the year trophy?

Stokes has received a particular mention in this category of accolades for his heroics in red-ball cricket over the past six months in addition to his remarkable leadership of the Three Lions.

The southpaw scored 870 runs, including two centuries and four half-centuries, took 26 wickets from 15 games, captained England to nine Test triumphs, and amassed these totals while scoring 870 runs himself. Their lone defeat occurred at home against South Africa.

As he played an attacking style of cricket in the home Test series against New Zealand and India, his teammate Bairstow also had a fantastic year in the longest format.

Usman Khawaja is making the most of his opportunities in red-ball cricket, even though he may not be in the Australian selectors’ plans for a time in white-ball cricket. The batsman, who was born in Pakistan, maintained consistency throughout the entire year while playing in whites, scoring 1080 runs from 11 matches, including four hundreds and five half-centuries.

In spite of the Proteas’ busy schedule this year, Kagiso Rabada remained South Africa’s standout player with the ball in hand. His fifer against England at the “Mecca” of cricket, Lord’s, was one of his best Test performances of the year.