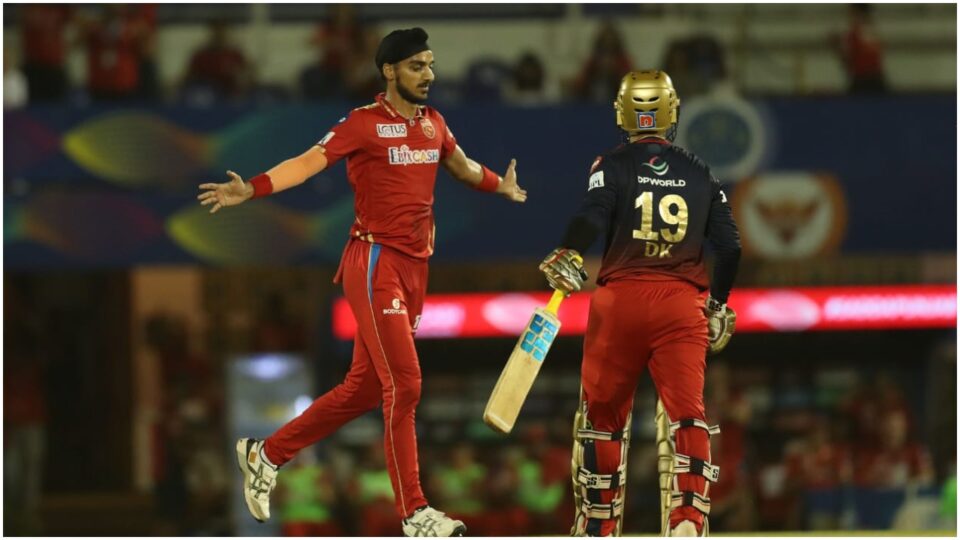 The 60th match of the IPL 2022 saw Royal Challengers Bangalore (RCB) and Punjab Kings (PBKS) face-off, with PBKS winning by 54 runs over Faf du Plessis’ side. Bangalore won the toss and decided to bowl first, which backfired spectacularly at the Brabourne Stadium, with Jonny Bairstow and Liam Livingstone going mad.

While Bairstow scored 66 off 29 at the top, giving his side a fairytale start, Livingstone shattered the RCB bowlers’ backs with his 70 off 42.

Punjab amassed a massive total of 209 runs thanks to brilliant innings from Englishmen. Harshal Patel continued to impress with a four-for on the night, while Wanindu Hasaranga kept things tight at the other end, allowing at an incredible 3.75 runs per over and taking two wickets.

When it came to chase, RCB struggled once again, as both openers, Virat Kohli (20) and Faf du Plessis (10) fell early on. Rajat Patidar (26) and Glenn Maxwell (35) gave RCB some hope, but their efforts paled in comparison to the massive required run rate.

Kagiso Rabada stunned PBKS once again, taking three wickets while surrendering only 5.25 runs per over. While Jonny Bairstow won a well deserved play of the match award.

Thus, now, RCB stands at 4th spot with 14 points in 13 games in the points table and will have to win their last game to give themselves a strong chance to qualify for the playoffs.

Meanwhile, PBKS have to keep winning to remain in the contention for a playoff spot as they now stand at 6th with 12 points in 12 games in the league standings.

After the match the winning captain Mayank Agarwal said

“We were brilliant with the bat. Wicket was holding up a bit. The way Jonny and Livi batted, was amazing. We haven’t changed a lot to be honest, just about understanding few situations, understanding the wicket.”

“Two points the most crucial thing for us. As long as the job gets done, I’m fine batting at five.”

“It was a good score, obviously Jonny the way he started put our bowlers under really pressure. I thought we pulled it back a bit. 200 was about par on that wicket, was a brilliant wicket.”

“Will take a day off and then see how we can switch on for a game that’s a must-win one for us. One more net session isn’t going to make you a better player, it’s about making yourselves stronger in the mind. If we play to our potential, we are a very strong side. Unfortunately, we didn’t do that tonight.”

What’s next for Bangalore and Punjab?

Next up for RCB will be a battle with the league leaders Gujarat Titans (GT) on 19th May, Thursday. While PBKS will be up against Delhi Capitals (DC) in a very crucial match on Monday, 16th May at DY Patil Stadium in Mumbai.