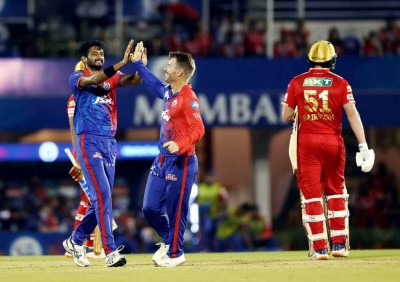 We are into the last week of the league stage and two teams, Punjab Kings (PBKS) and Delhi Capitals (DC) who are right in the middle of an intense playoff race will be fighting out in the game number 64 of IPL 2022.

This season, the Punjab Kings have won six of their twelve games. They beat Royal Challengers Bangalore by 54 runs after batting first and scoring 209 runs. Punjab will need to win all of their remaining games, including this one, to qualify for the playoffs.

DC, like PBKS, has won 6 out of 12 games, but has a superior net run rate. In the previous match, DC beat Rajasthan Royals by 8 wickets after chasing a goal of 161 runs in 18.1 overs. Prithvi Shaw, who has missed the last two matches, might return to the DC starting lineup.

The DY Patil Sports Academy’s surface has provided something for both hitters and bowlers. The new ball moves a little, but as the hitters settle in, the stroke-making becomes easier. Given the dew issue, the skipper who wins the toss could opt to have a field first at this venue.

Shikhar Dhawan has scored 402 runs at an average of 40.20 and a strike rate of 122.93 in 12 matches this season, including three half-centuries.