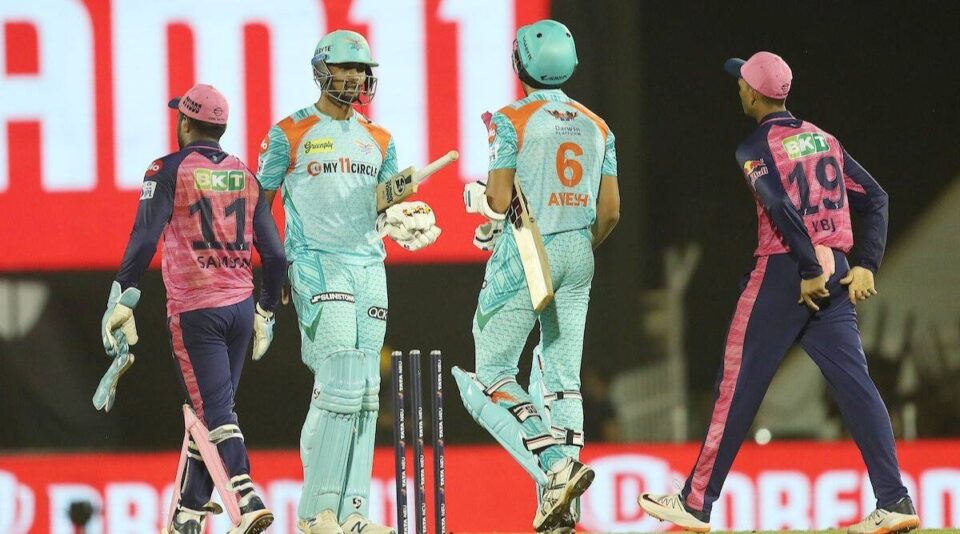 At the Brabourne Stadium in Mumbai, the Rajasthan Royals (RR) defeated the Lucknow Super Giants (LSG) by 24 runs in a much-needed win game in IPL 2022. Rajasthan has moved closer to a playoff berth as a result of the win, as they are now in the safe zone with 16 points with only one game left.

Sanju Samson, the RR captain, won the toss and by against the trend he chose to bat first.  After the in-form Jos Buttler was removed for two runs, Samson and youngster Yashasvi Jaiswal put on a 64-run stand. Jaiswal top-scored with a 29-ball 41, while Samson hit 32 runs from 24 deliveries.

RR posted a competitive total of 178/6 thanks to Devdutt Padikkal’s 39 runs and finishing touches from Ashwin (10*) and Boult (17*). Ravi Bishnoi finished with 2/31 numbers, while Avesh Khan, Jason Holder, and Ayush Badoni each got one scalp.

In response, LSG lost their top-order, including captain KL Rahul and  Quinton de Kock, cheaply. However, Krunal Pandya and Deepak Hooda came to the rescue with a 65-run fourth-wicket stand. Hooda anchored the chase after Krunal was dismissed before succumbing in the 16th over while attempting to meet the expensive asking rate.

Marcus Stoinis had a cameo of 27 runs off 17 balls near the end, but it was not enough as LSG were reduced to 154/8. Trent Boult (2/18), Prasidh Krishna (2/32) and Obed McCoy (2/35) ripped up the LSG batting order. While frontline spinners Ravichandran Ashwin and Yuzvendra Chahal each took one wicket.

Thus, RR now inched a step closer to securing an IPL 2022 playoff berth, as they are now in the safe zone with 16 points with only one game left. While LSG slipped down to 3rd spot with 16 points in 13 games and now needs a win in their last game to confirm their playoff spot.

After the match the winning captain Sanju Samson said

“We have been taking some good decisions. It is very hard to maintain a chilled out atmosphere when things don’t go your way. Credit to the boys. You keep on losing here and there. We want to go out there and express ourselves as a batting unit. We have a quality bowling line up to defend. Last game also, Ashwin did well.”

“Each and everyone went out there and showed some intent despite playing a batter short. You can’t really think much in this format, you just go out and express.”

“I thought it was a gettable target. Good pitch, obviously something there with the new ball. We bowled well to restrict them to that total. We backed ourselves but we couldn’t execute. Once again the batting group hasn’t been able to perform collectively.”

“We’ve got power in our batting line, so it is just about playing smart when the bowlers are bowling a good spell.”

What’s next for Rajasthan and Lucknow?

Next up for RR is a clash against Chennai Super Kings (CSK) on Friday, May 20, at Brabourne Stadium, in Mumbai. Meanwhile, LSG will take on Kolkata Knight Riders (KKR) on Wednesday, May 18 at DY Patil in Mumbai.