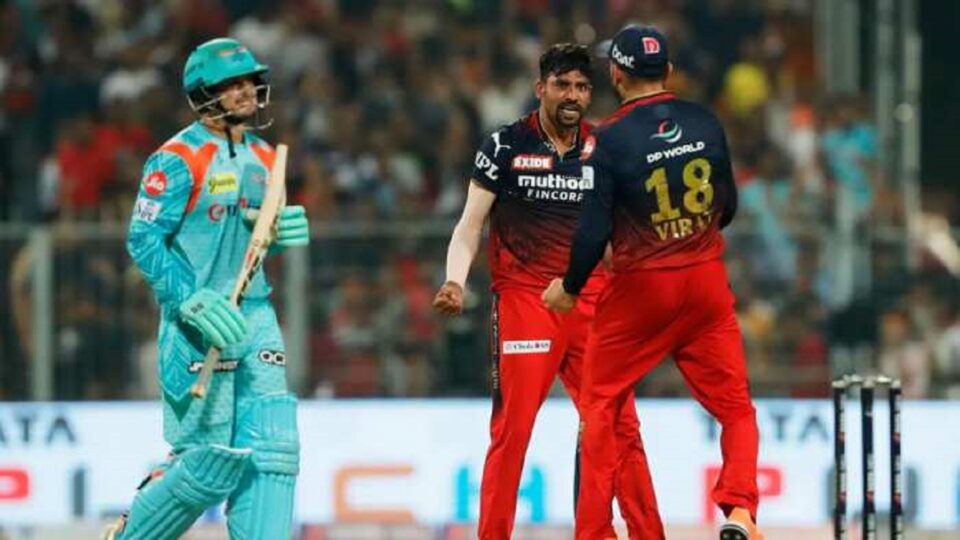 After defeating the new entrants Lucknow Super Giants (LSG) during their Eliminator match played at the legendary Eden Gardens in Kolkata, Royal Challengers Bangalore (RCB) managed to live another day in the 15th edition of the Indian Premier League (IPL).

KL Rahul, the captain of the new franchise LSG, won the toss and chose to bowl first. His decision paid off when RCB skipper Faf du Plessis was out early, but Rajat Patidar and Virat Kohli ensured that the Red Army made a strong recovery.

Patidar was the more aggressive of the two, stroking limits virtually every time. Kohli’s wicket was taken by pacer Avesh Khan while Glenn Maxwell and Mahipal Lomror, both batters, were ineffective.

However, the Red Army crossed the 200-run barrier because to a superb finish by wicketkeeper-batsman Dinesh Karthik (37* off 23 balls). Moreover, Rajat Patidar played a magnificent century knock scoring (112* off 54 balls.

LSG got off to a bad start in their chase for 208 runs, losing their star batsman, Quinton de Kock, on his personal score of six runs. Manan Vohra (19), the Indian hitter, played a few strokes before eventully departing back to pavilion.

The newcomers were kept in the competition thanks to the efforts of skipper KL Rahul and Deepak Hooda. After Hooda was dismissed for 45 runs, Marcus Stoinis of Australia and Rahul of India kept the scoreboard ticking.

LSG, on the other hand, lost the plot in the final overs, as Rahul (79 off 58) and Stoinis were both dismissed in consecutive overs. As a result, LSG lost the game by 14 runs and was eliminated from the competition.

After the match the winning captain Faf du Plessis said

“Today was a special day. The guys put in a special performance. Over the moon. For a young guy to play like he did. The way he celebrated also tells you he has a good head on his shoulders. His hundred was one of the best I have seen in the IPL.”

“Every one was calm and relaxed. Harshal is the joker in the pack. A special card I can pick. He bowls the important overs. Second last one over from him changed the game for us.”

“I think it’s quite obvious – the reasons why we didn’t win. We let ourselves down in the field. Dropping easy catches never helps. Difference was obviously Patidar playing such a knock.”

“We’ll take back a lot of positives. It’s a new franchise. We’ve made a lot of mistakes, every team does that. Have to try and come back stronger. It’s a young team. They’ll learn from their mistakes, go back home and try and be better players.”

What’s next for Bangalore & Lucknow?

Thus, now the 2nd qualifier will see a derby between the Royals as RR and RCB battle it out to play the finals against Gujarat Titans. While LSG will be looking to bounce back in the next season.