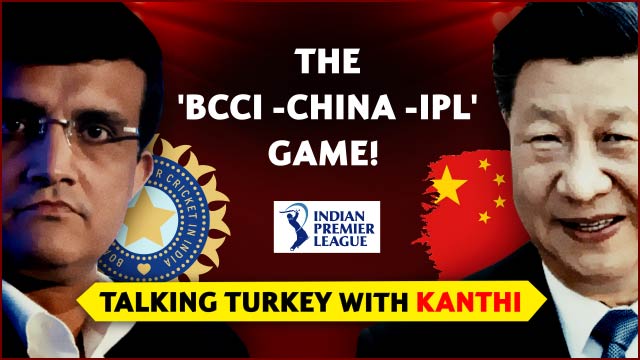 Ever since the border stand-off with China in the Galwan valley, which resulted in the martyrdom of 20 of our valiant soldiers, the whole of India is swept by an anti-China wave. However, even when the entire country has erupted with a call to boycott anything that is Chinese—including products, contracts, etc., BCCI seems to be in a different zone altogether.

The apex cricket body is in no mood to sever ties with its Chinese sponsors turning a deaf ear to the reverberation in India of shunning all goods from China. “Talking Turkey with Turkey,” in its latest episode, revealed that almost every Indian wants to boycott Chinese goods in the wake of the ongoing border dispute. But, it is very surprising that BCCI, unabashedly, is justifying the Chinese investment in sports, saying that cutting ties would be a loss for Indian sports and not them.

The BCCI is hell-bent on hosting the IPL, despite the spread of the pandemic, because it is a milch cow for them. “Is supporting IPL’s cause similar to supporting India’s cause?,” asks Kanthi D Suresh, show-host, and Editor-in-chief of Power Sportz. As the sports debate show progressed several interesting facts came out, revealing a lot about BCCI’s intent.

So, what are the details that “Talking Turkey with Kanthi” unearthed this week? To know more about other details, log on to Power Sportz and watch the full episode here.