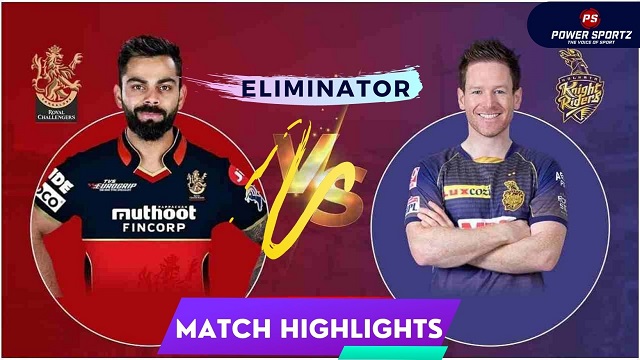 KKR have advanced to the playoff of the IPL after beating RCB by four wickets. Kolkata will face Delhi on the 13th of October and the winner of that match will reach the final; The final is set to be held on the 15th of October at 7:30 pm IST. The next two matches of the IPL are bound to be electrifying and it will result in either one of Kolkata, Chennai or Delhi being crowned the champions of the 2021 season.

Bangalore started their innings agaisnt KKR in an efficient manner with Kohli and Paddikal establishing a partnership of 49 runs; However, they struggled thereafter as they weren’t able to form a partnership and lost wickets at regular intervals. This resulted in RCB only able to score 138 runs which was an easy target to chase.

The West Indies spinner Sunil Narien had a wondrous spell for his side and picked up four wickets. In addition to Sunil Narien, bowlers such as Lockie Ferguson and Varun Chakarvarthy added a great deal of pressure on Bangalore. Even though none of the batsman in KKR scored above 30 runs they were able to win the match. In the post match interview king Kohli and Morgan both felt that the reason RCB lost the match is because they weren’t able to add sufficient runs on the board.

KKR will need to improve their bating to win this years IPL.

Kolkata are set to face Delhi who have an inform bowling unit; DC have many world-class players such as Avesh Khan, Rabada, Nortje, Ashwin and Axar Patel. These bowlers will be eager to prove a point after displaying a disappointing performance against Chennai in their last game. Kolkata will need to improve their batting if they hope to beat Rishab Pants team and reach the finals.

Shubhman Gill feels that KKR have a slight edge against Delhi to win this match as they have been more accustomed to the pitch that they would be playing on. Who do you think will win the match on the 13th of October and play CSK in the final?