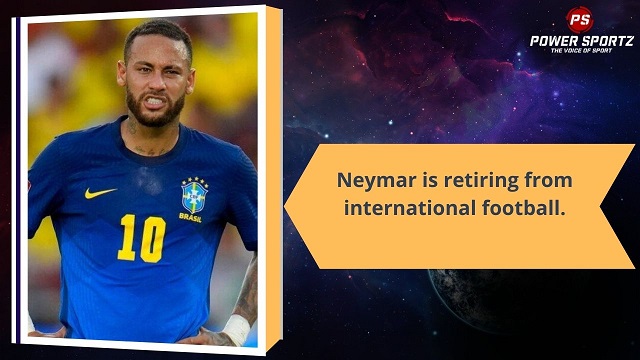 Neymar has given an interview where he affirmed that the 2022 World Cup might be his last one. This is because he feels that he doesn’t possess the mental capacity to keep playing football. This news has shocked footballing fans from all around the world.

The 29-year-old star has an estimated market value of 100 million euros. Over the last few years he has been regarded as one of the best players in the world of football. Unfortunately, he has received a lot criticism as people feel he has not pushed himself enough. PSG have Neymar on a contract till 2025; the club will find it difficult to replace him if he chose to retire from football in the near future. The French club might push to sell him in the upcoming transfer window to generate some money before his value diminishes.

Neymar has expressed that he will give his all to win the next world cup in 2022.

Brazil were knocked out by Belgium in the 2018, Fifa World Cup which took place in Russia. The playmaker had a disappointing tournament and was only able to score 2 goals in 5 matches. As this moment Brazil are coming first in their division of the 2022 world cup qualifiers. Their next qualifying match for Brazil is against Uruguay on the 15th of October at 6 am IST. Neymar is expected to miss the next game for his club plays at its held on the 16th of October which is one day after he plays for Brazil. The superstar is set to be involved in the game after that which is set to be played against RB Leipzig in the Champions League.

Neymar hasn’t played a significant role in his club’s success this season as he’s only been able to provide 2 assists and 1 goal in the 7 matches he’s played this season. The maestro must improve his form if hopes to win the 2022 Qutar World Cup for his country.