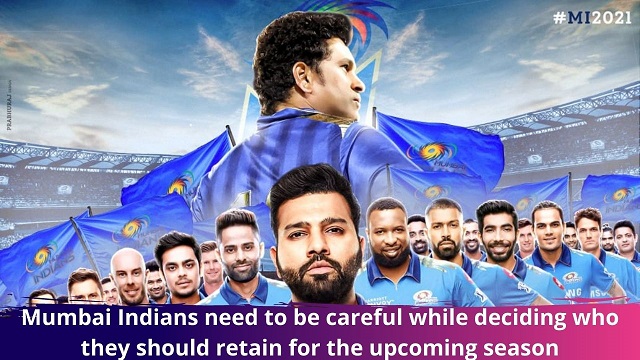 Mumbai Indians failed to qualify for the playoff of the 2021 IPL season. After winning the last two IPLs the defending champions have finished 5th in this season. Rohit Sharma and Mahela Jayawardene will need to make any changes before the start of the next season. In a few months, there will be a mega auction for the next season.

The forthcoming season will pave a path for two new teams. BCCI has asserted that these new teams could be from the cities of Guwahati, Ranchi, Ahmedabad, Lucknow, Dharamshala and Cuttack. There will be bidding between these cities to add their team to the league; The BCCI expressed that they anticipate the bids to go beyond 3500 crores each.

Even though the defending champions had a disappointing season; Mumbai Indians have numerous players who they would like to retain in the upcoming season. Players such as Rohit Sharma, Suryakumar Yadhav, Kieron Pollard and Ishan Kishan have been remarkable with the bat over the past few seasons. In addition to these batsmen bowlers such as Jaspit Bumrah, Rahul Chahar and Trent Boult have been phenomenal and have joined the list of players who could be retained by MI. As things stand teams will only be eligible to retain four players in their side in the upcoming season. Mumbai Indians are expected to retain their captain Rohit Sharma and their senior pacer Jasprit Bumrah. The other two positions will be difficult to predict and could go to any of the budding superstars of the roaster.