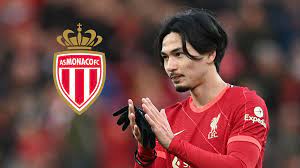 Liverpool have broken their banks to make a club-record signing in name of Darwin Nunez and now they want to recover the spending by cashing in on players and one of the recent ones to be added in the list is the Reds forward Takumi Minamino, who will join Monaco. It was a well-thought-off transfer move and it will eventually benefit all the 3 parties.

The attacker is just 27-year-old and possesses enough skills to get a place in the first team of any top club. With this deal in place now, Minamino will get enough game time which he was in need of. While the French club will have good attacking options up front with a player who can not only play as a striker but also as a winger. And it will add some cash inflows in the Merseyside club’s account in a way to make the transfer window a balance which maintains the inflows and outflows.

Takumi Minamino, the Japanese international, will be sold by Liverpool to Monaco for 18 million euros (£15.5 million). The 27-year-old was sought after by a number of teams, including the Ligue 1 team. He joined the Reds from Red Bull Salzburg for £7.25 million in 2020.

Liverpool forward Minamino on his way to join Monaco

A set 15 million euros (£12.9 million) and 3 million euros (£2.6 million) in add-ons make up the Minamino contract. In 55 games with the Reds, he scored 14 goals, making him their leading scorer in domestic cup competitions the previous campaign. The FA Cup and League Cup were won by Jurgen Klopp’s team in large part because to Minamino’s seven goals.

Although Liverpool ended a point behind Manchester City, he only had 11 Premier League games, including one start. Minamino made 10 games while on loan at Southampton before returning to Liverpool for the 2021–22 season.

Thus, the Japanese forward will now be looking to get more game time when he start his new journey with Monaco. Meanwhile, Sadio Mane, the forward from Senegal, is also on the verge of departing Liverpool. As the Merseysiders and German club Bayern Munich agreed to a £35.1 million transfer fee, which includes a set £27.4 million for the 30-year-old.

Thus, following the initial £64 million transfer of Uruguayan striker Darwin Nunez from Benfica, sales are anticipated. Along with signing Calvin Ramsay, an 18-year-old fullback from Aberdeen for £4.2 million, Liverpool also acquired forward Fabio Carvalho from Fulham for £5 million.While the incoming have been great for Liverpool FC this summer, the outgoing names now includes 3 Mane, Origi, and Minamino.