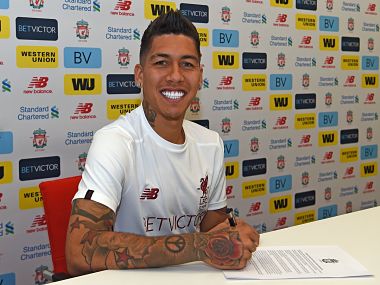 According to reports, Liverpool has given Brazilian international Roberto Firmino‘s new contract top priority. Firmino has contributed significantly to Liverpool’s success under Jurgen Klopp since joining the Reds from Hoffenheim in the summer of 2015.

Firmino has amassed seven victories at Anfield, including a Premier League and a Champions League crown. In 21 appearances this season, Firmino has scored nine goals and contributed four assists, but an injury has prevented him from playing since the World Cup break.

With such efforts, he has now contributed 107 goals and 78 assists in 348 games for the Merseyside club. There is speculation that a rebuild is necessary for Liverpool, who are struggling at the moment.

The Red half of the Merseyside currently sits in ninth place in the Premier League standings. Firmino’s contract expires at the end of the current campaign, but he still seems to be an important part of Liverpool’s long-term ambitions.

Liverpool to offer a new contract to Roberto Firmino?

A contract extension until 2025 is anticipated for the 31-year-old, according to Sky Germany reporter Florian Plettenberg. According to the source, Firmino was courted by Saudi Arabian clubs, but he wants to keep competing at the top level.

Despite their desire to keep Firmino, Liverpool are yet to extend contracts to James Milner, Alex Oxlade-Chamberlain, and Naby Keita, all of whom have their last season’s left on their current contracts.

Despite dealing with a number of injuries, Klopp stated that he did not anticipate any new additions this month ahead to Tuesday’s FA Cup victory against Wolverhampton Wanderers.

Diogo Jota and Luis Diaz are now sidelined for the Reds with calf and knee problems, respectively.

Additionally unavailable to Klopp are Firmino (calf), Arthur Melo (thigh), and Virgil van Dijk (hamstring), however Darwin Nunez, who has missed the past two games, might play this weekend.

Harvey Elliott’s first-half goal gave Liverpool a 1-0 victory over Wolves in the third round of the FA Cup to make up for their 3-0 loss to Brighton & Hove Albion on Saturday.

With the two teams tied on 28 points in midtable following the tight victory, Liverpool will now turn its attention to Saturday’s home game against Chelsea.

Liverpool have lost just 2 of their last 15 Premier League clashes against Chelsea. Winning 6 and Drawing 7. Although one of the Reds’ defeat came recently in 2021 at Anfield.

Two Indians get a promotion in the ICC ODI rankings