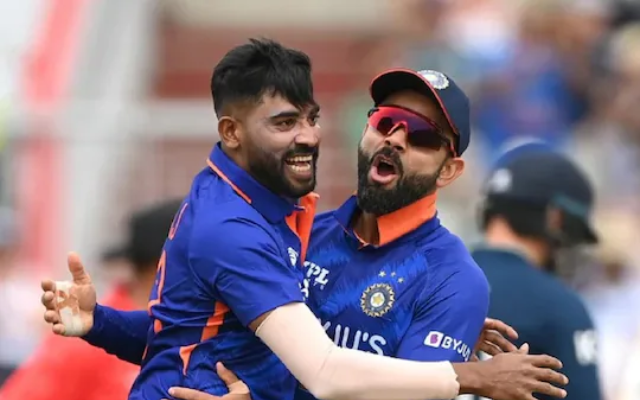 The former captain of India has risen to fourth place among batsmen, while Siraj has made his way to third place among bowlers. In the just finished ODI series, Virat Kohli, who hammered two century, was voted the player of the series for his prolific performances.

He rose four spots in the ICC ODI rankings thanks to his amazing run ability, finishing in fourth place with 750 points. King Kohli is not too far behind the Proteas duo of Rassie van der Dussen and Quinton de Kock, who are ranked second and third, respectively, and might overtake them in the forthcoming series to take over second spot.

Mohammed Siraj, India’s star fast bowler and perhaps their best bowler for 50-over matches at the present. He has earned career-high rating points to move up to third place in the bowling rankings.

After dazzling performances in the Sri Lanka series, where he claimed nine wickets in three games, his career took off. He has been in roaring form in ODIs since the beginning of the previous year, and he may very well unseat Trent Boult as the best bowler in the next calendar.

A three-match ODI series between the Men in Blue and the Kiwis will begin on January 18 (Today) in Hyderabad. India lost Shreyas Iyer to a back injury prior to the series opener, keeping him out of the forthcoming series.

The injured batter will be going to the NCA for additional evaluation, hence Rajat Patidar has been designated as a replacement on the bench. Suryakumar Yadav, a T20 phenom, is expected to replace Iyer in the starting XI for the series opener.

Meanwhile, India will be looking to find the balanced group of players as they began their preparation for the upcoming World Cup.

The Man in Blues will be looking forward to giving chance to different sets of players. As the 13th edition of the Cricket glory awaits at the end of this year.

India and New Zealand will lock horns as the Worlds no. 4th and no. 1st team respectively.

Update on Rishabh Pant, who is likely to get a discharge in 2 weeks