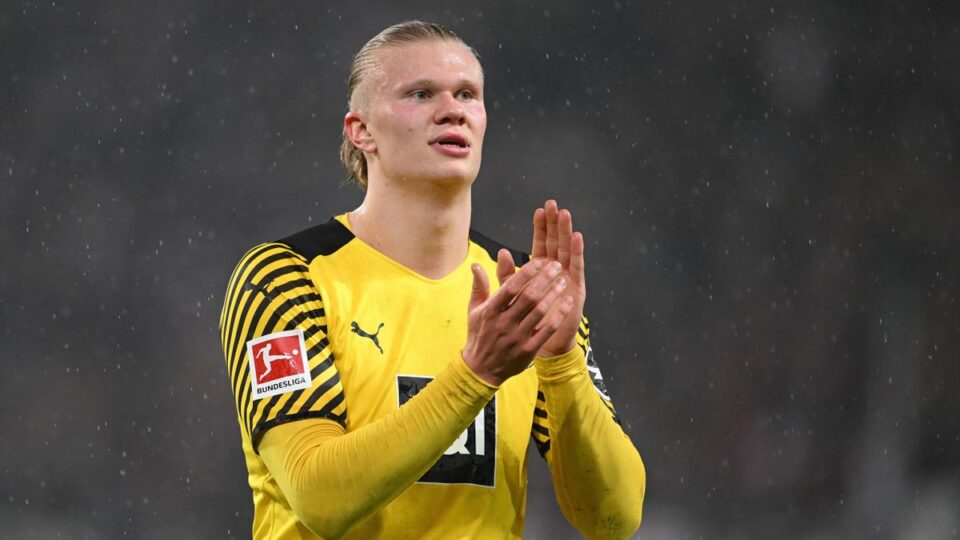 After missing out on Harry Kane last year, Man City are looking to recruit Erling Haaland this summer.

Borussia Dortmund forward Erling Haaland has a 75-million-euro release clause in his contract; Real Madrid are also interested in signing the striker, but their aim is to pursue Kylian Mbappe if he departs PSG.

Meanwhile, Manchester City are preparing to trigger Erling Haaland‘s 75-million-euro release clause in order to bring him to the Etihad this summer.

The 75 million euro (£62 million) price tag for Haaland is commonly thought to be below market value. However, City will have to pay the 21-year-old, who is represented by Mino Raiola, more than £500,000 per week.

Meanwhile, Dortmund have already found the Norwegian’s replacement in name of  Karim Adeyemi.

Following the departure of club-record goalscorer Sergio Aguero, City have often played without a recognised striker this season. Thus, the Sky Blues are often criticized for not investing in striker as they find it difficult to break down defensive teams.

Guardiola was interested in signing Tottenham striker Harry Kane last summer, but City’s bids were turned down. However, now, the Citizens are looking to bring some young legs to empower their attacking line in name of Haaland.

Haaland joined Dortmund from Salzburg in January 2020 and has since scored 82 goals in 85 appearances. Despite missing many games due to injury this season, Haaland has still scored 25 goals in 26 appearances.

Last year, Manchester United was said to be interested in Haaland. But their main focus now remains to hire an appropriate manager.

While Real Madrid has been City’s most serious competition for Haaland during his spell at Dortmund. But the Spanish giants are prioritizing a move for Kylian Mbappe, if he leaves PSG this summer.

An official announcement is yet to be made regarding City’s bid but The Daily Mail reports that Citizens have agreed personal terms with Haaland. Erling Haaland’s representative has agreed on a deal that will make him the highest paid player in the Premier League.