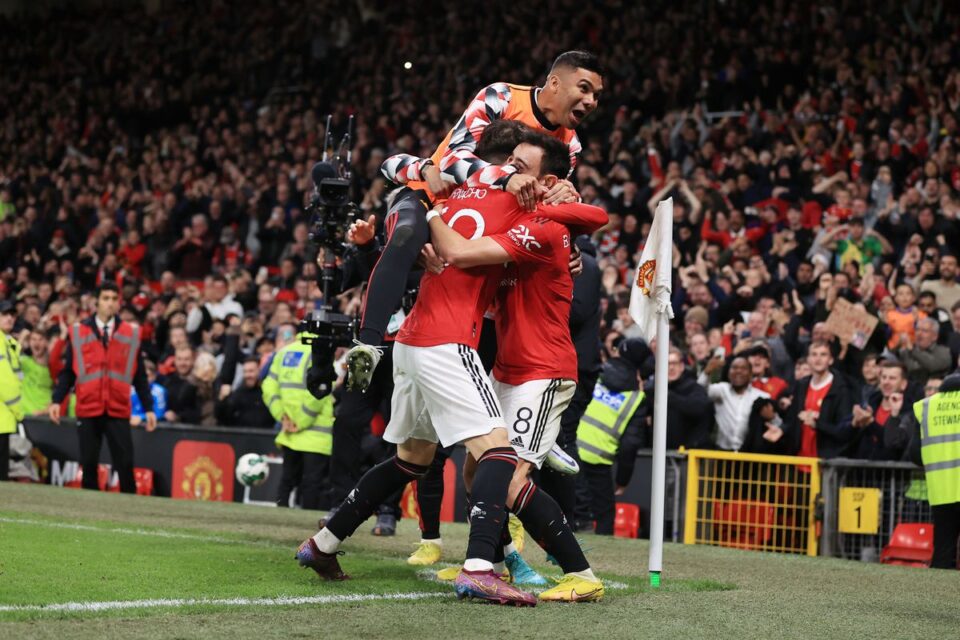 Manchester United defeated fellow Premier League team Aston Villa 4-2 at Old Trafford to advance to the fourth round of the EFL Cup. In the 48th minute of the game, Ollie Watkins gave Villa the lead before Anthony Martial tied the score less than a minute later.

Diogo Dalot’s own goal gave Unai Emery’s team the lead shortly after the hour mark, but Marcus Rashford, who had recently been called up to represent England at the World Cup, again tied the score in the 67th minute before Bruno Fernandes’ deflection goal gave the hosts the lead.

In the closing minutes, Scott McTominay gave Erik ten Hag’s team a fourth goal after connecting with a beautiful pass from the dynamic Alejandro Garnacho. The two clubs faced off in the Premier League on Sunday afternoon, with Villa securing a 3-1 victory while Man United was out for vengeance.

The 37-year-old Cristiano Ronaldo was out for the visitors due to illness, and Antony and Jadon Sancho were once more absent for a team that last won the League Cup in 2017.

The offside flag saved the visitors, who were on the back foot in the opening minutes, when Fernandes converted a cross from Rashford in the 18th minute and had the ball in the back of the net for Villa. In the 24th minute, Dalot headed a Tyrell Malacia cross over the net for Villa, and McTominay then had to clear a potentially deadly Douglas Luiz corner at the opposite end.

When Ashley Young encountered a dropped ball beyond the penalty area in the 33rd minute, he attempted the spectacular against his former team, but his effort was always too high.

Early in the second half, Watkins gave Villa the lead by skillfully finishing past Martin Dubravka after sprinting onto a feed from Jacob Ramsey.

Less than a minute later, though, Man United equalized when Fernandes intercepted a pass from Dalot and rolled the ball into Martial, who was in close range and could not mistake.

The visitors reclaimed the lead when Dalot turned into his own net from close range after Young’s cross found the head of Leon Bailey in the 61st minute. Rashford’s powerful shot was deflected wide of the Villa box in the 54th minute.

Rashford nearly gave the Red Devils an immediate response with another thunderous strike, but it just missed the post. Watkins then missed wide at the other end.

However, Rashford did manage to tie the score in the 67th minute by seizing control of a loose ball inside the Villa box and firing a close-range shot past goalkeeper Robin Olsen.

Twenty minutes from the end, Fernandes curled a shot beyond the Villa goal, and in the 76th minute, the Portugal international forced an excellent save from Olsen after turning and shooting inside the box.

Then, after sustained pressure from the home team, Olsen denied a powerful header from Harry Maguire, and Fernandes narrowly missed the goal with a low shot.

The Jamaican international’s excellent footwork then set up Watkins for a chance down the other end, but the striker’s touch inside the Man United area was too heavy, and the opportunity was lost.

In the 78th minute, Man United scored their third goal when Olsen mishandled a pass that allowed Garnacho to find Fernandes. Tyrone Mings then deflected Fernandes’ shot into the goal.

In the 89th minute, McTominay struck a shot against the crossbar before Christian Eriksen headed wide. However, Man United added a fourth goal late on when McTominay converted from within the box following a superb cross from Garnacho.

Sunday’s Premier League match for Man United is against Fulham, and Villa’s final match before the World Cup break is against Brighton & Hove Albion the same afternoon.