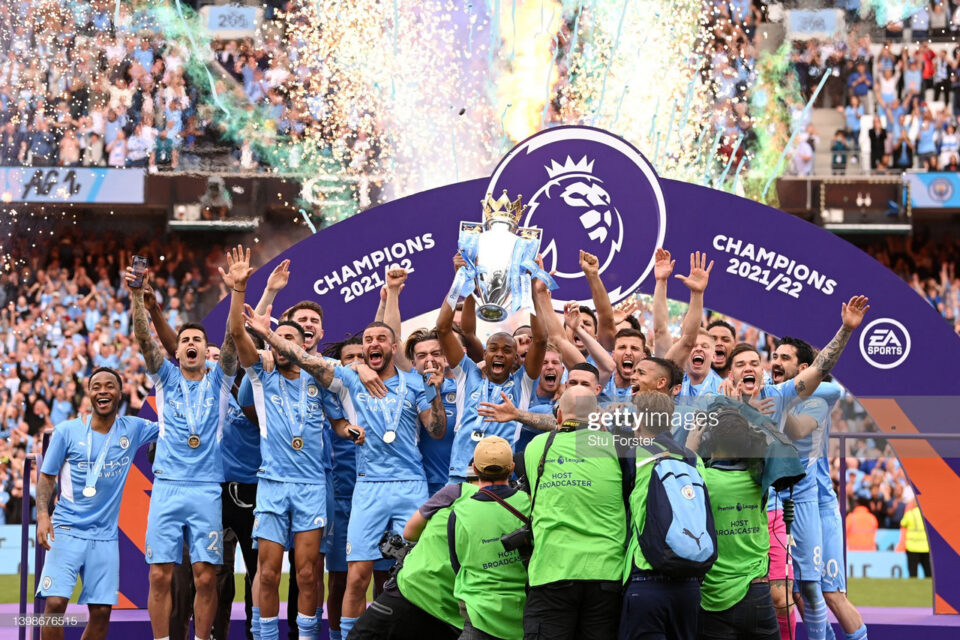 Manchester City became the champions of England again after defeating Aston Villa in a 5-goal thriller on the final Matchday at Etihad Stadium.

In the first half, Manchester City controlled, but it was Villa who broke the deadlock in the 37th minute when Matty Cash struck an excellent header. The hosts started the second half strongly and should have equalised five minutes after the break when Gabriel Jesus sent a point-blank effort over the crossbar.

Ollie Watkins then dragged a shot narrowly wide just moments later after running clean through on goal. That miss, however, was quickly forgotten as the visitors scored a second in the 69th minute. Coutinho cut inside on the edge of the penalty area before firing a low-driven effort into the bottom-left corner after Watkins flicked on a header.

After Matty Cash and former Liverpool midfielder, Philippe Coutinho scored either side of halftime, the Citizens trailed 2-0 heading into the last 15 minutes. But a brace from substitute Ilkay Gundogan and a goal from Rodri helped the hosts turn the game around in a span of five minutes.

It was for the first time since February 2005 that Man City came from 2 goals down to win a Premier League game. Thus, this helped the Citizens to become the champions of England for the sixth time, with four of those coming in the last 5 seasons.

Pep Guardiola’s side finished the campaign at the top of the table with 93 points, just one clear of rivals Jurgen Klopp’s Liverpool. Thus, the Sky Blues were able to successfully defend their title after lifting the PL trophy in the previous season.

After the match the Man City boss Pep Guardiola said

“The moment we found a goal it changed everything,”

“We are playing in not normal circumstances but you have to handle it.”

“Gundogan is the best inside runner we have. We were arriving down the sides and we needed a player with the sense of tempo in the box and he’s the best.”

“We are legends. When you win the Premier League four times in five seasons it’s because these guys are so, so special. We will be remembered. The first title we won with lots of margin, then at Brighton, then winning at home without fans and now with people, it’s the best.”

Moreover, Pep also went on to praise the Liverpool team and their boss Jurgen Klopp. The City boss said

“Jurgen Klopp said a few days ago that there are few winners but a lot of triers. I love this concept. I am a good trier, that is for sure. Am I going to say that Liverpool are losers after what they have done in the Premier League over the recent years?

“One team was a little, little, little, one inch better than them, but they are winners. Of course, society says there is just one who is first and the rest they are a disaster. That is giving an incredibly wrong message to the new generation, the kids.”

“You have to be a good trier, do it every time, never give up. Both teams – Liverpool and ourselves – have done that in the last five years.”

Thus, the rivalry continues. At one end Liverpool, who have already won two domestic cups this season will try to add European glory to finish their season as the Reds take on Real Madrid in the UCL final on 28th May. While Man City will be looking to add a striker and jump that extra mile for the European success in the next season.