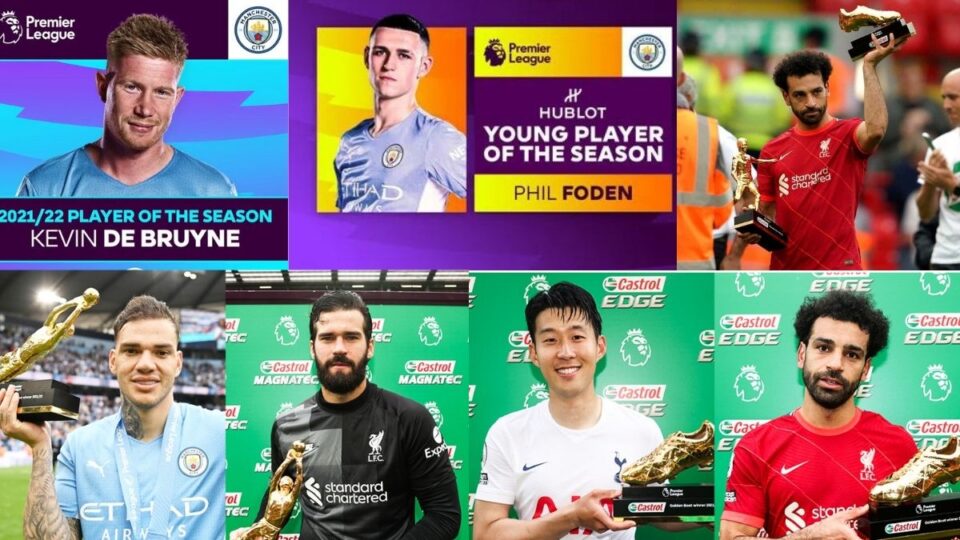 The Premier League 2021-22 season saw its final Matchday on Sunday, May 22. It was a topsy-turvy drive for the fans as the title wasn’t decided until the last kick of the PL season.

Eventually, Manchester City did enough to make it to the finish line as the Sky Blues turned a 2-0 deficit into a 3-2 win inside the span of 5 minutes against Aston Villa to win the Premier League for the 6th time. While Liverpool, who themselves came from behind against Wolves to clinch on a 3-1 victory but the title was already decided at the Etihad Stadium.

With Salah scoring once and Son scoring twice on the final day, both the attacking players finished with 23 goals each.

Thus, with this, the Egyptian clinched his 3rd Golden Boot award within last 5 seasons. Meanwhile, Son has won his maiden Golden Boot accolade in the Premier League and notably, all of his goals have been non-penalty goals.

The title-winning campaign of Manchester City saw Kevin De Bruyne being named as the player of the season. With this, De Bruyne joins Thierry Henry, Cristiano Ronaldo, and Nemanja Vidic as the only players to win the award in more than one Premier League season.

Looking at the stats, it led to a controversial decision as many football pundits saw Salah to be the more deserving candidate.

While the Citizens’ youngster Phil Foden won the Premier League young player of the year. The 21-year-old scored 9 goals with 5 assists and created 37 crucial chances for Man City to clinch the award ahead of Trent and Saka.

Meanwhile, Brazilian keepers Alisson and Emerson shared the Golden Glove award for the most clean sheets (20).

While Liverpool’s Mohamed Salah not only won the Golden Boot but also registered his 1st Playmaker of the season. Salah finished with 13 assists just one ahead of fellow Liverpool player Trent Alexander-Arnold (12).