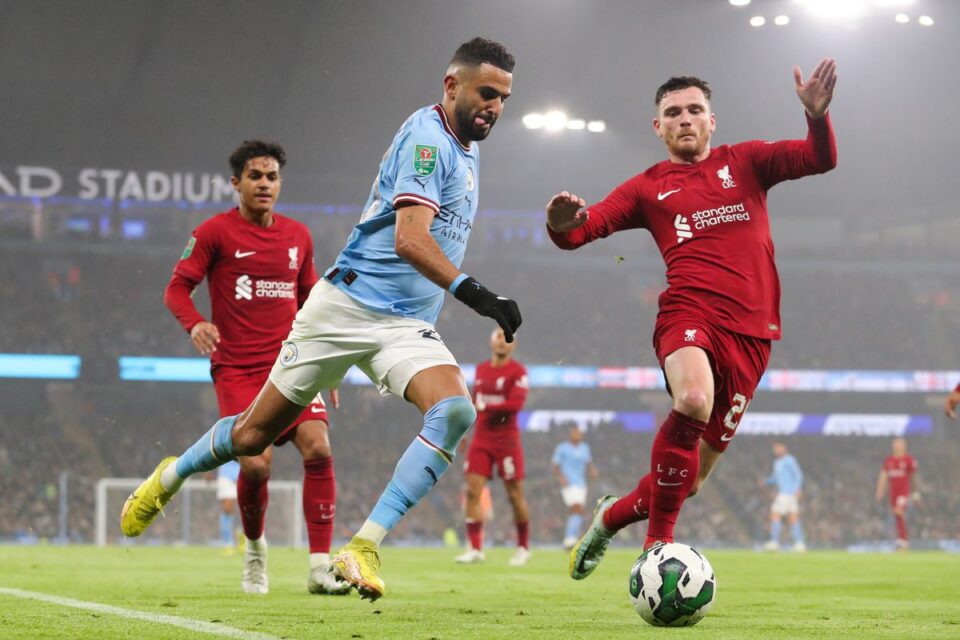 Manchester City beat Liverpool 3-2 at the Etihad to move to the quarterfinals, Thus, ending Liverpool’s EFL Cup defence in the fourth round.

Fabio Carvalho’s goal negated Erling Braut Haaland’s goal to tie the score at 1-1 for the out-of-sorts holders, and a frantic second half saw Riyad Mahrez and Mohamed Salah score within 80 seconds of one another.

But Nathan Ake would end the match after receiving a cross from man of the match De Bruyne, who put his awful World Cup memories behind him and went back to being fantastic in sky blue.

The game at the Etihad began with an odd light and pyrotechnic display, but the crowd crammed into the stadium enjoyed quite the spectacle from the home team early on, with Liverpool simply not up to the task.

After only 10 minutes, the hosts’ dominance was rewarded when Haaland’s 24th goal of the season was scored after De Bruyne’s left-side cross found him. Haaland slipped past Joe Gomez as the Liverpool player was off guard and stuck his boot out to reach the bottom corner.

Despite a notably shaky effort from Gomez in the Liverpool backline, Haaland’s opening goal was no less than Pep Guardiola’s team deserved. However, adding a second proved to be futile.

Just 10 minutes after Haaland’s goal, Jurgen Klopp’s team shockingly tied the score when James Milner found space in the box after some excellent play from Joel Matip and found Carvalho, who dragged the ball into the bottom corner.

Liverpool 2-3 Manchester City: The Reds fails to defend their title

In their first competitive match after the World Cup, neither team displayed the slightest sign of complacency. In the 36th and 37th minutes, City had two golden opportunities to try to retake the lead, but Caoimhin Kelleher’s trailing leg stopped Ilkay Gundogan’s shot before Ake connected with a beautiful Kevin De Bruyne cross, only to have his header also saved by the Liverpool number two.

The squandering Darwin Nunez had the final chance of the first 45 when he met Andy Robertson’s outswinging free kick but mishit his side-footed volley well wide of the post.

At halftime, Klopp made changes to his midfield after losing Milner to what appeared to be a hamstring injury in the first half. Fabinho and Alex Oxlade-Chamberlain replaced Stefan Bajcetic and goal scorer Carvalho, respectively.

Riyad Mahrez flawlessly hauled down Rodri’s long ball inside the box in the 47th minute, giving City the lead with barely any time for the substitutes to stretch their legs. The Algerian then took one touch to cut inside before reaching the far corner.

However, City undoubtedly demonstrated why clubs are most vulnerable immediately after a goal is conceded when, 80 seconds after Mahrez’s goal, Nunez sprinted down the left following a fantastic cross from Oxlade-Chamberlain, then found Salah to tap in into an empty net.

As the game neared the hour mark, there were still goals coming in thick and fast. In the 58th minute, a short corner sequence culminated with Ake hitting home from a beautiful De Bruyne cross to the back post.

The Premier League winners will play Southampton at St. Mary’s in the quarterfinals thanks to Guardiola’s defense’s ability to hold firm in the closing minutes. City is one step closer to winning the EFL Cup for the fifth time in six seasons.