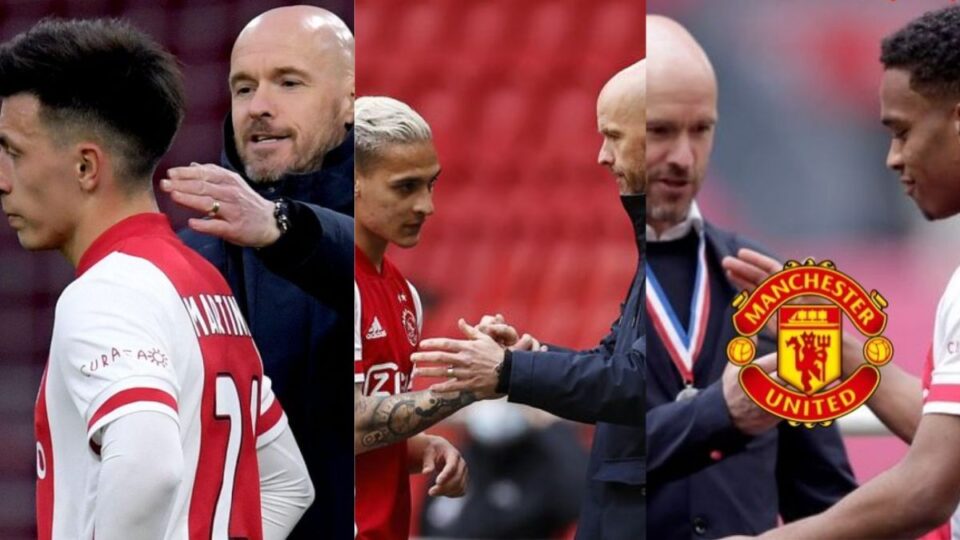 Jurrien Timber, Lisandro Martinez, and Antony are all players that Manchester United is apparently in talks with Ajax about this summer.

Manchester United will soon begin their new season under their new boss Erik ten Hag, who is also the former manager of the Dutch club Ajax. During his time at Ajax, Ten Hag developed a few players under him and was impressed with their performances.

Thus, now the 52-year-old Dutchman is interested in bring in his developed players at Old Trafford in the ongoing summer transfer window.

While all three players are targets for the 20-time English champions’ boss Erik ten Hag.

The Dutchman might be officially announced as the first signing of the Erik ten Hag era this week.

With the Red Devils reportedly close to reaching an agreement with Barcelona about the transfer of Frenkie de Jong. Timber, Martinez, and Antony, who all made an impression under Ten Hag in Amsterdam last season, have also been prominently linked with moves to United.

According to Dutch writer Marcel van der Kraan, who had claimed that Netherlands manager Louis van Gaal had talked the defender out of coming to the Red Devils. The reporter also added suggesting that a deal for Timber had purportedly fallen through.

However, according to Italian journalist Fabrizio Romano, Man United are still in talks with Ajax over Timber. Adding to that list is Martinez and Brazilian attacker Antony, who are being targeted by Ten Hag this summer.

“It is important to clarify that Man United are focused on Frenkie de Jong and in direct talks with Barcelona, but they are also negotiating for other players. The club is active on multiple deals, including discussions with Ajax on Timber, Lisandro Martinez (but Arsenal are also working for the Argentine centre-back) and Antony,” Romano wrote in his column for CaughtOffside.

Meanwhile, Martinez is reportedly the target of Arsenal’s summer transfer plans, although Ajax are reportedly not under any time constraints to sell the defender. The reports further added that the Dutch club would reject any offers below £45 million for Martinez.

During the 2021–22 season, Antony made a strong impression for his Dutch team, recording 12 goals and 10 assists in 32 games across all competitions. The Brazilian international, though, might be too expensive for Manchester, according to Dutch writer Van der Kraan, whose club Ajax values him at £80 million.

“Antony, for instance, is worth £80m in the eyes of Ajax. The prices they are asking for are absolutely huge because they have no need to sell. They know Man United, like many clubs in Europe at this moment, need players. So it’s a very awkward position Manchester United are in at the moment,” Van der Kraan told Sky Sports News.

“Antony, he (Ten Hag) thinks is a great player but he knows he is too expensive at this moment, and that Frenkie de Jong is much more of an important player for him than Antony.”

On Monday, Man United resumed preseason workouts, with Ten Hag leading his first session since being named the team’s new head coach toward the end of the previous campaign.