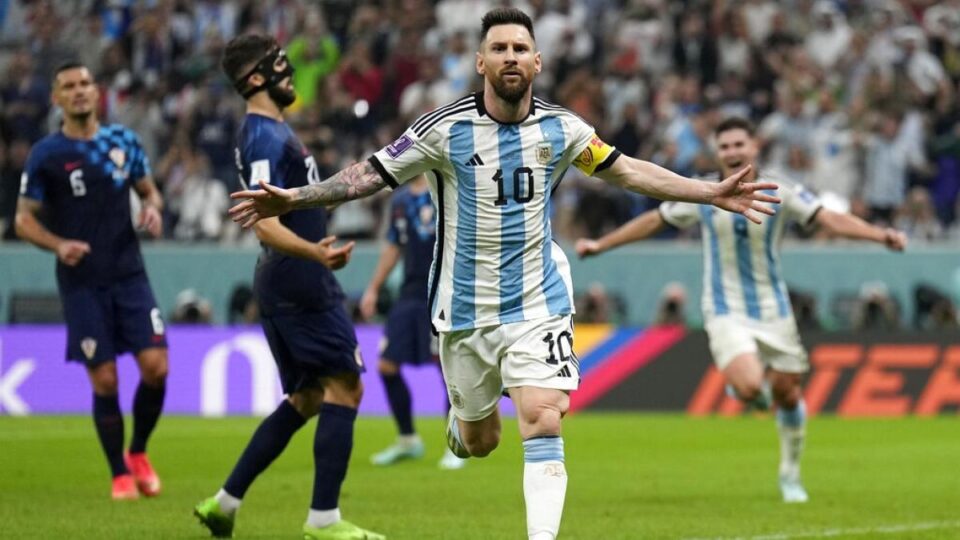 Argentina defeated Croatia 3-0 in the semi-final on Tuesday night, securing their spot in the 2022 World Cup final. The Lusail Stadium witnessed a Lionel Messi masterpiece as the renowned forward opened the scoring from the penalty spot midway through the first half.

Julian Alvarez then scored twice after the break to advance La Albiceleste to their sixth World Cup final. In the championship game on Sunday, Argentina will take on either France or Morocco, the current champions.

Croatia, the runners-up from last year, exits in the final four and will now get ready for the third-place playoff on Saturday.

Leandro Paredes and Nicolas Tagliafico replaced Lisandro Martinez and the suspended Marcos Acuna in Lionel Scaloni’s team that defeated the Netherlands on penalties in the quarterfinals, while Croatia kept the same lineup from last Friday’s shootout victory against Brazil.

The first 30 minutes of the match at the Lusail Stadium were tense, but the action picked up in the 32nd minute when Alvarez raced onto a beautiful route-one pass and sliced through the Croatian defence.

Goalkeeper Dominik Livakovic then collided with the Argentine No. 9, and referee Daniele Orsato pointed to the spot for a penalty. Argentina was ahead when Messi went up and scored with ease from 12 yards out, passing Gabriel Batistuta to become the country’s all-time best scorer in the World Cup with 11 goals.

Alvarez doubled Argentina’s advantage four minutes later in spectacular fashion. The 22-year-old picked up the ball inside his own half, drove through the centre of Croatia’s defence, though with a fair amount of luck, and the ball kindly popped up for him to strike from close range with the top of his right boot beyond Livakovic.

When Alexis Mac Allister’s head flicked on an in-swinging corner at the near post in the 42nd minute, Argentina came dangerously close to scoring a third goal. However, Livakovic made a brilliant reaction save by tipping the ball away for a corner.

As a result of Croatia’s inferior performance in the first half, Zlatko Dalic made three attack-minded substitutions in the first five minutes of the second half, bringing in Nikola Vlasic, Mislav Orsic, and Bruno Petkovic to give the team a much-needed threat in the final third.

But a brilliant performance by Argentina’s No. 10, Messi, who has won the Ballon d’Or seven times, put Argentina ahead in the 69th minute when he set up Alvarez for their third goal.\

Messi and Josko Gvardiol engaged in an intriguing one-on-one duel down Argentina’s right, but it was the former who prevailed, using his strength and cunning to weave past the 6′ 3″ defender and set up Alvarez to tap home inside the six-yard box. Messi is arguably the world’s best forward who was up against the world’s brightest defensive prospect.

Alvarez, who has now scored four goals in the 2022 World Cup, was substituted in the 75th minute by Paulo Dybala, who got his first start in Qatar, preventing him from completing his hat-trick.

While Argentina’s standout stars Messi and Alvarez shone the brightest, Croatia captain Luka Modric’s final dance for the Checkered Ones did not go as planned, but the 2018 Golden Ball winner leaves the international stage having cemented his legacy as one of the greatest midfielders of his generation.

With Argentina having advanced to their first World Cup final since 2014, Messi has one last chance to claim the one trophy that has eluded him throughout his incredible career.