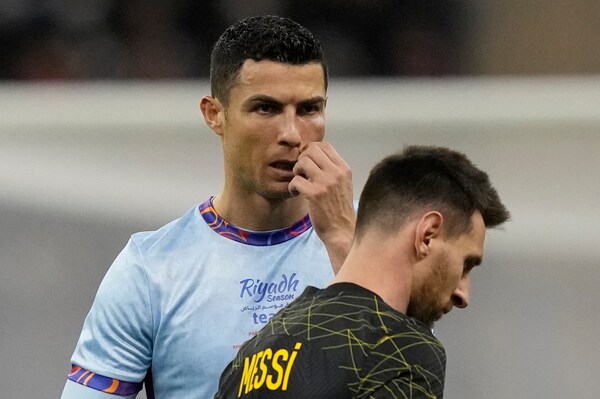 In what might be their final ever encounter, Lionel Messi and Cristiano Ronaldo both scored for their respective teams. As Paris Saint-Germain (PSG) defeated a Riyadh (Saudi) All-Star XI 5-4 in a thrilling exhibition game in Saudi Arabia yesterday.

Since joining the club earlier this month, Ronaldo played in the match for the first time in Saudi Arabian football. Mr. Number 7’s contentious split from Manchester United led to him joining the Saudi Pro League.

His debut for Al-Nassr had been delayed due to a previous suspension from his stint at Old Trafford. With two goals on the night, the 37-year-old did not disappoint his fans, though Messi, his enduring nemesis, ultimately came out on top after scoring the game’s first goal after only three minutes.

Four goals, a red card, and two penalties were showcased in the first half alone of this action-packed match, and five more goals were scored in the second half as PSG defeated their Saudi Pro League-playing opponents.

After Neymar chipped the ball through, it only took Messi three minutes to deliver the opening blow in what had been hailed as the latest and possibly final chapter in the illustrious Messi vs. Ronaldo rivalry. Messi then guided a finish past the advancing goalkeeper.

Keylor Navas, whose transfer to Al-Nassr has been rumoured, denied Ronaldo on his first shot at goal.

It was a back-and-forth battle between the two sides as Messi’s goal was later on cancelled out by Ronaldo’s debut goal. Marquinhos again brought PSG in the front gear but CR7 was out again to equalize from the spot kick.

While Ronaldo’s past teammate Sergio Ramos retained PSG’s lead earlier in the 2nd half which saw Jang Hyun-soo equalizer after a couple of minutes. An Mbappe spot kick gave PSG the lead again which saw the last kick of the ball for the Frenchman.

Ronaldo, Messi, Neymar, and Mbappe were all substituted soon past the hour mark, and the activity then finally slowed down.

Eventually it was the French giants who came on the top Hugo Ekitike scoring the final for PSG while Talisca scoring one for the reconciliation.