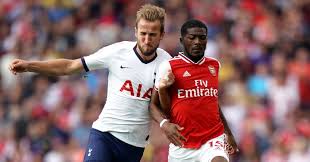 The magic of Harry Kane and Son Heung-Min worked again to manifest a Tottenham Hotspur 2-0 win at home over Arsenal. With this victory in the North London derby they remain top of the Premier League.

The fantastic duo helped each other on Sunday to score respective goals and seal the fate of the match by half-time. Kane now has 14 goals and 12 assists in all competitions, while Son has 13 goals and six assists in his kitty.

Son gave the breakthrough in the 13th minute after Kane had held the ball up for his run down the left. The South Korean then reciprocated the favour in first-half injury-time, picking out Kane’s curling run before the England striker deceived Bernd Leno in the Arsenal goal.

Arsenal now have their worst ever start to a Premier League campaign after Sunday’s loss. From their last seven games, Arsenal ceded victory five times to the opposition.

On the other hand, Liverpool remain second after they orchestrated a cake walk victory over Wolves thrashing them 4-0 on Sunday evening.

For Liverpool Mohamed Salah opened the scoring after a defensive error from Conor Coady, and Georginio Wijnaldum doubled Liverpool’s lead with a lovely curling shot in the 58th minute.

Joel Matip gave the third from Salah’s cross after a corner in the 67th minute and Nelson Semedo’s own goal sealed a win lapped by an overjoyed 2,000 fans in the stands at Anfield.

Chelsea remained at third as they maintained their excellent form on Saturday, fighting back from a goal down to beat Leeds United 3-1.

Former Chelsea youngster Patrick Bamford propelled Leeds ahead after four minutes. But Olivier Giroud continued his run of goals to equalize in the 27th minute. Then Kurt Zouma put Chelsea ahead with a header from a corner after the hour and Christian Pulisic added a third in injury-time.