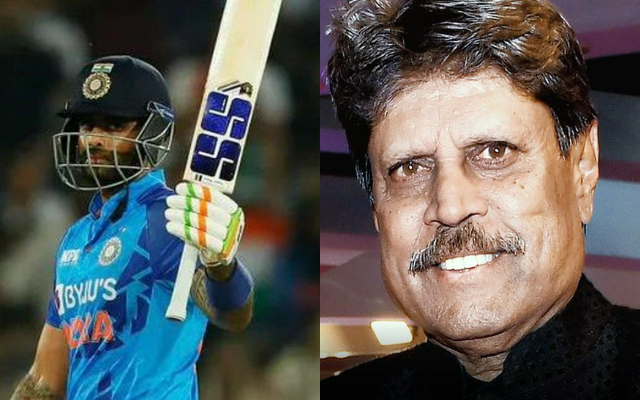 Suryakumar scored an undefeated century against Sri Lanka in the third T20I on Saturday, prompting Kapil Dev’s comments. The biggest accolade a batsman can receive is to be listed alongside legends like Vivian Richards, Sachin Tendulkar, or Virat Kohli by one of the greatest players of all time.

These players have altered the rules of the game in addition to producing numerous records that have propelled them to the top of the charts. According to Indian cricketing legend Kapil Dev, who complimented the Indian batter and called him a “once in a century” player, Suryakumar Yadav has also improved.

The 32-year-old put up an incredible performance against Sri Lanka in the third Twenty20 International in Rajkot on Saturday, Suryakumar scored an unbeaten 51-ball 112* to help India win the series.

When asked about Suryakumar’s performance, the 1983 World Cup champion skipper was rendered speechless and instead compared his batting prowess to that of legends like Sachin, Richards, Kohli, and Ricky Ponting.

“Sometimes I am at a loss of words on how to describe his [Suryakumar] knock. When we see Sachin Tendulkar, Rohit Sharma, and Virat Kohli, we feel that someday there will be a player who will compel us to think he is also part of that list.”

“There is indeed a lot of talent in India. And the kind of cricket he plays, that lap shot the one over fine leg, then that leaves the bowler frightened because he can stand and hit a six over mid-on and mid-wicket,”

he said while speaking to ABP News.

Kapil Dev praised Suryakumar Yadav for his ability to routinely hit big runs, describing him as a once-in-a-century batter. He continued by comparing Suryakumar to AB de Villiers, Tendulkar, Kohli, and Ponting, claiming that while all of them are renowned players, only Suryakumar is capable of hitting the ball as cleanly as they can.

“That is what makes it difficult for the bowlers because he is able to pick the line and length consistently. I have seen great batters like De Villiers, Vivian Richards, Sachin, Virat, and Ricky Ponting, but very few can hit the ball as cleanly as him. Hats off to Suryakumar Yadav. These kinds of players come only once in a century,”