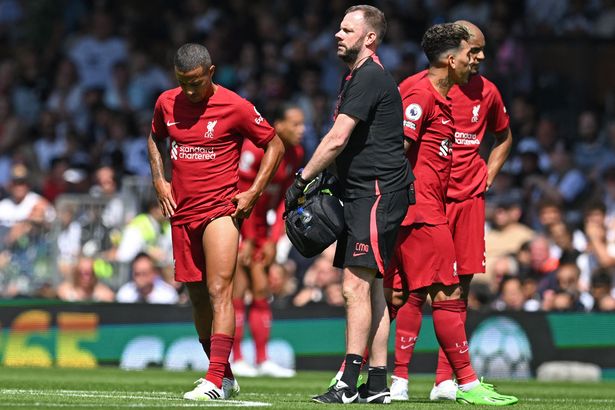 According to a source, Liverpool is preparing to manage without midfielder Thiago Alcantara for up to six weeks owing to a hamstring injury. The injured Spaniard started Saturday’s Premier League opener against Fulham alongside Jordan Henderson and Fabinho before being substituted early in the 2nd half.

The 31-year-old was spotted clutching his hamstring as he exited the Craven Cottage field, and Jurgen Klopp quickly acknowledged that the situation did not appear good.

Liverpool came back from 1-0 and 2-1 deficits to draw 2-2 with the Cottagers, but worries quickly surfaced over Thiago’s potential for further injury. The Athletic reports that Thiago has now had a scan on the problem, and it is serious enough to keep him out of action for up to six weeks,

Thus, this means he won’t be available until at least the middle of September. The Spain international joined fellow midfielders Curtis Jones and Alex Oxlade-Chamberlain in the treatment room after being limited to just 17 Premier League starts in the 2021–22 season.

After Thiago’s injury, Klopp was questioned about Liverpool’s decision to hold off on adding to their midfield ranks during this transfer window. However, the German coach – who will shortly have Naby Keita back from illness – reiterated that he was not willing to just purchase a temporary solution.

Thiago is apparently scheduled for a second scan to ascertain an exact timetable, but according to a different story from the Liverpool Echo, the Reds do not think his issue is actually “severe.”

“I know what will now come up, it’s clear. We said we don’t need a midfielder because we have enough – and we actually have enough, but the problem now is we get punished for something that is not our responsibility really because things like this can happen,”

“Nobody could imagine that Curtis gets the thing he gets; it is nothing serious but he is a young boy and it is a kind of stress reaction. Bodies are like this. Naby is only ill and he will now be back definitely next week again. Oxlade happened early and now with Thiago that is, of course, not good and we will see.

“Look, a transfer must make sense now and in the long term; we have midfielders, we have still enough midfielders. It is not that we lack midfielders, but it’s just some of them are injured.

“This is not a good situation, I don’t like it at all, but we have to see how we react on that – but for sure not panicking.”

Jude Bellingham, Matheus Nunes, and Marcelo Brozovic have all been mentioned as potential transfers to Anfield. Klopp’s team is reportedly exploring a swap deal for Marcelo Brozovic including either Roberto Firmino or Keita.