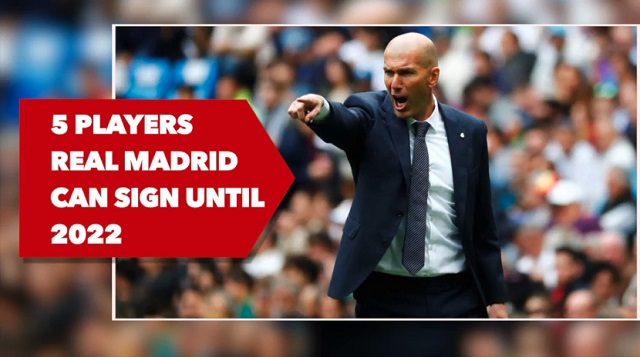 Real Madrid has been struggling to have a steady hand on the tiller since the departure of Cristiano Ronaldo, who joined Juventus in the summer of 2018. Last summer, Los Blancos signed Eden Hazard from Chelsea.

However, his impact is not looking perfectly positive to lead Real to the top of the La Liga points table.

Many football fans and experts believe that filling the boots of the Portuguese international will take a lot of sums in the transfer market for Real Madrid. Zinedine Zidane’s side is looking to add some quality players to take the club forward as the competition in Europe is becoming bigger and better after every single season. So let’s take a look at the five attacking players Real fans would love to sign.

England captain Harry Kane, who has been battling with injuries since the start of last season, can be a great asset to have in the squad. Many football pundits see a fit-Kane as the best football player in the world,

particularly in the striking department. Tottenham chairman Daniel Levy is asking £200million for his biggest jewel. At present, due to the coronavirus pandemic, spending £200million would be hard even for Real Madrid. Kane, who hasn’t won silverware at Spurs, has helped his beloved side from London to steady their ship at the top of the EPL table.

The 26-year-old striker has scored 136 goals and provided 20 assists in 201 Premier League appearances. The EPL fixture list is never easy to surpass. However, with quality forwards and strikers, any decent manager would love to take the club forward. Kane, without injuries, can score more than 30 goals in every single season for Real Madrid.

Despite linking with a move back to Barcelona, Real Madrid fans could see the ace Brazilian player joining the force at the Santiago Bernabeu Stadium. Neymar started this season with some injury problems. However, his classic stability helped PSG to win their ninth Ligue 1 title. Not just the EPL table, Neymar’s touch can also make a huge impact on the La Liga points table.

Just like Real Madrid, Paris Saint-Germain also have many quality players to win the Champions League. Neymar helped PSG this season to reach the Champions League quarters – but the COVID-19 pandemic jeopardized the plans of the side from Paris. The 28-year-old forward, with rich club history, can win his second Champions League title if he manages to make a move to La Liga from Ligue 1. However, the PSG fans would love to see Neymar making them the European champions before ending his time in France.

Erling Haaland has made too many headlines in Europe this season. The Norwegian international had a great first half of the 2019-20 season at RB Salzburg. His amazing touch in the Austrian Bundesliga captivated many big sides. In the 2020 winter transfer market, Borussia Dortmund defeated Manchester United to sign Haaland. His initial impact in Germany has made many fans feel optimistic. Many football experts see Haaland becoming the best football player in the world.

His range of scoring goals can benefit Real Madrid to stand perfectly at the top of the La Liga points table. Haaland has been linked with a move to join the Spanish giants recently. Real fans can possibly see Haaland wearing Real Madrid colors in the summer of 2021.

In the modern-day football world, most of the experts of football see Kylian Mbappe, whose deal will be over at Paris Saint-Germain in the summer of 2022, becoming the best football player in the world. In just 20 Ligue 1 appearances in the 2019-20 season, the 2018 FIFA World Cup winner scored 18 goals.

The 21-year-old forward has won too many titles at a very young age. Real Madrid fans need the perfect replacement of Ronaldo, who won four Champions League titles for his beloved Real. In terms of scoring goals, Mbappe can be a perfect choice for Zinedine Zidane. In just 32 Champions League appearances, Mbappe has scored 19 goals. In the 2016-17 UCL season, Mbappe scored six times in nine games and helped Monaco to reach the semi-finals of the competition.

Even the clubs like Manchester City and Liverpool would love to add the French forward for maintaining their mark at the top of the EPL table. Real fans feel with the arrival of Mbappe, they can end the dominance of FC Barcelona in the La Liga points table. In the 2018-19 Ligue 1 season, Mbappe blasted 33 goals in just 29 matches for the 12-time French Cup winners.

PSG are desperate to win their first-ever Champions League title. Even Mbappe would fancy winning the Champions League at PSG for cementing his mark in the French capital. It can also be the best way to leave the club for a new challenge in a different location for Mbappe. Real Madrid will most likely face huge challenges from many Premier League clubs for the signatures of the 21-year-old forward.