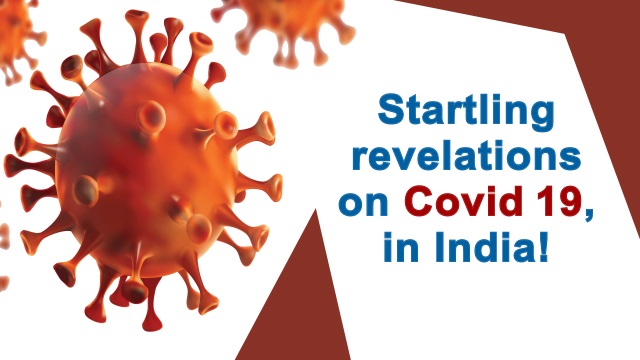 The fifth week of the Lockdown in India has thrown up enough data on the Virus, to be able to make meaningful inferences.  The conclusions drawn now would certainly hold better than the ones made at the beginning by many scientists and epidemiologists, of Indian Origin, who had, with an air of aplomb and confidence concluded that India with its rickety healthcare system, would see 300 million positive cases, with 5 to 6 million, severely critical.  The current 30000+ cases which have been reported, with more than 75% of them having mild or almost no symptoms, is reason enough for a new fear amongst the global epidemiologists, who at the moment could be focussing on mandated vaccination policies

Fear, Uncertainty, & Doubt (FUD) is not something unknown in the field of Sales & Marketing and is commonly seen in Public Relations, Politics, and Propaganda! FUD is generally a strategy to influence perception by disseminating negative and dubious or false information and a manifestation of the appeal to fear

Unfortunately, Panic along with Paranoia and hysteria seems to be growing at a faster pace than the Novel Corona Virus, in India.

The data available till date reveals the following

Population density is the number of individuals per unit geographic area and has been regarded as the evil force behind the spread of the pandemic. Social Distancing, the apparent solution to the Corona Virus aims at reducing the population density, so as to reduce the R naught of the Virus or in other words lower the reproductive capacity of the virus. Bihar, with the highest Population density in India of 1102/sq km, has registered 2 deaths in the Corona Virus pandemic. Incidentally, Bihar registered 1 death in the Seasonal Flu, in 2019!

Madhya Pradesh, with a population density of 236/sq km, has seen 119 deaths till date, and had also registered 156 deaths last year during the Seasonal flu in 2019.

E)      Regions with the oldest population have registered lowest deaths

The directives and guidelines on the ‘most vulnerable to Covid attacks’ in the age group above 60 years, has been proven wrong by Kerala and Goa. The state of Kerala with 12.6% of its population above 60, has seen 4 Corona Deaths and Goa with 11.2% of its population above 60, has had zero deaths.  Incidentally, Goa registered 3 seasonal flu deaths in 2019

The above data certainly brings us to doubt on the behavior of the Novel Corona Virus in India. It may be also worthwhile to note the observations of the Swedish government on the reporting of Corona deaths. Questions have been raised on the deaths being reported, with a degree of uncertainty on whether the death was caused on account of the coronavirus or associated with the virus, but caused on account of other conditions, or was it just plain reporting of the seasonal flu!

The deaths and cases for Seasonal flu for 2020, have still not been recorded in India and is definitely not available in the public domain.

Whatever said and done, as per Government data available, it is apparently clear that the seasonal flu in India has been more fatal.

But, the Corona Virus has made us suddenly understand the importance of human life!