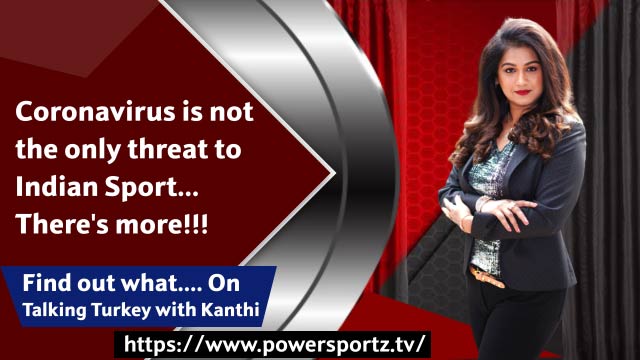 As the world is reeling under the scourge of COVID-19, resulting in a total lockdown of countries worst affected, the sporting fraternity has also massively come under its sway. Major leagues and tournaments across the world are being called off due to its pernicious and alarming spread.

However, Indian sports is fighting a bigger monster than the novel Coronavirus, according to “Talking Turkey with Kanthi”, the flagship show of Power Sportz. It is sports doping. This was the topic of discussion on the show aired on March 6.

In the last few years, doping cases are on the rise. More surprising is the fact that sports like shooting and boxing, where doping was unheard of have recorded players falling prey to performance-enhancing drugs, knowingly or unknowingly.

This is throwing the gauntlet to our athletes as they are busy preparing for this year’s Tokyo Olympics, quipped show-host and Editor-in-chief of Power Sportz Ms. Kanthi D Suresh.

As many as 170 athletes had tested positive for banned substances last year, revealed the show. What is most startling is that drugs meant for horses are now found in the samples of the athletes.

So, what is the driving force that compels athletes to go to such lengths? Is it the windfall of monetary compensation once an athlete bags an international medal? Or the stakes of an Olympic medal is so high that athletes are ready to risk their health by taking a banned substance? Are players who feign ignorance gullible?

To find the answers to all these, the reason for taking a drug and the psychology behind this, log on to Power Sportz and watch the full episode here.