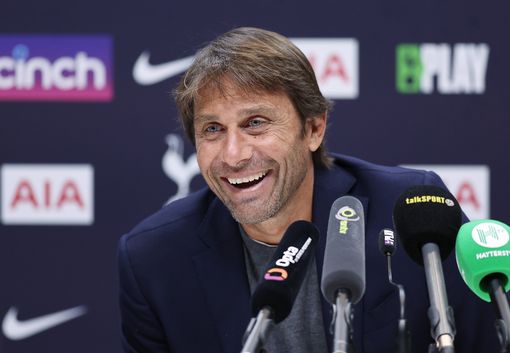 Following Sunday’s 2-0 loss to the Gunners, Tottenham boss Antonio Conte has named only 2 teams to be the title contenders. According to the Spurs manager only Manchester City and Arsenal are capable of challenging for the Premier League championship.

Spurs paid the price for a sluggish start against their fierce rivals, who rightfully led by two goals at halftime. Thanks to a mistake by Hugo Lloris and an exquisite Martin Odegaard goal.

Aaron Ramsdale, the top goalkeeper for Arsenal, produced a number of critical stops to keep the hosts at bay. Thus, sending the Gunners eight points clear at the top of the standings despite Tottenham’s post-halftime improvement.

With 33 points from 19 games, Conte’s team is in in fifth place in the Premier League table. This means five points behind fourth-placed Manchester United while having played one more game.

After the game, Conte stated that he was “not unhappy” with how his squad played against a team that he believes is in a two-horse race for the title.

“In my opinion Arsenal and City are the only two teams that can fight for the Premier League this season. At the same time I’m a bit disappointed for the way we lost.”

“But we created chances to try to score. At the same time we didn’t lose our mind, our head. At this point of the game the risk is to lose your head and concede other goals and to finish with a really, really bad defeat. Instead I think we have to be disappointed for the bad result but at the same time I saw a big effort from my players.”

When Bukayo Saka crossed the ball with 14 minutes remaining, World Cup winner Lloris, who had just announced his retirement from international play, made another high-profile error while playing for Tottenham.

Conte, however, asserts that his confidence in the 36-year-old is as high as ever.

“In this situation it’s always difficult. I think that it’s not positive to be focused on only one situation or two situation.”

“Football I know is this and sometimes you can do positive and save many situations positively but honestly I consider Hugo one of the best keepers in the world and it can happen.”

“It can happen that sometimes you can make a mistake. For sure when there is the mistake of the keeper it is more visible. Hugo for us is a one of the players who is really important for the dressing room, for his personality because we are talking about a player who is one of the best keepers in the world.”

The derby came to a disappointing conclusion as Richarlison and Ramsdale engaged in a quick set-to before the Arsenal goalie retrieved his possessions next to the goal, at which point a fan kicked him in the back.

Ramsdale and Granit Xhaka had to be restrained from pursuing after the supporter when he forced his way onto the advertising boards and then swiftly rushed back up the bleachers.

Conte expressed his unhappiness after the match saying

“I didn’t see it but before I was asked about it in an interview with the media. If it happened, this situation is not good. It’s not positive.”

On Thursday night, Tottenham will play their next match away against the defending Premier League winners, Man City.