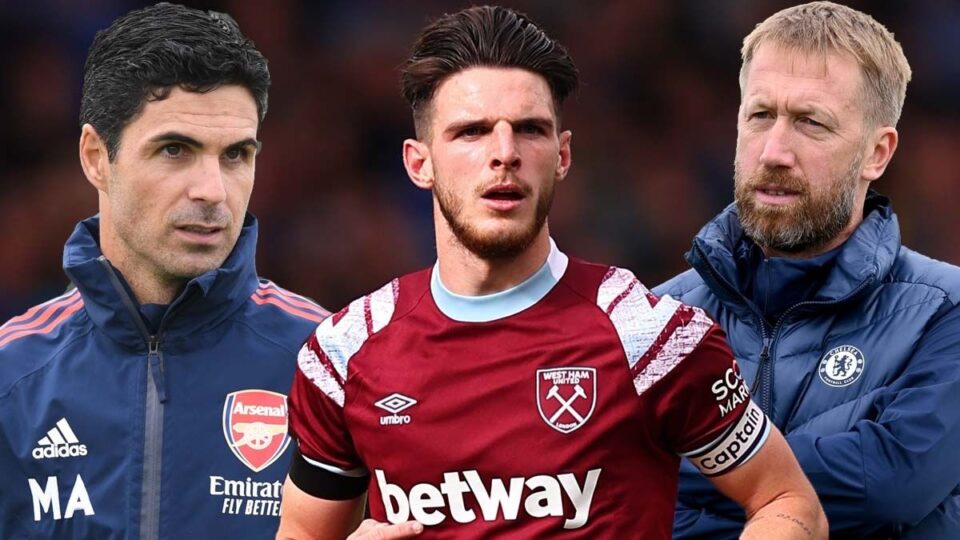 The West Ham captain & midfielder Declan Rice is apparently a top target for Arsenal in the forthcoming transfer window.

Moreover, the club is optimistic that they may get him in the summer. Rice’s contract at the London Stadium has just 18 months left on it, and the Hammers have reportedly made three proposals to extend it to him.

Despite interest from some of the Elite European clubs Declan Rice has remain devoted to West Ham United. Since coming from the Chelsea academy in the summer of 2013, Clubs like Man City, and Man United have all tried to sign the midfielder.

Although Rice’s contract issue means West Ham will soon have to lower their £100 million valuation. Meanwhile, manager David Moyes has publicly declared that Rice is not for sale.

Prior to the 2023–24 season, Rice has reportedly emerged as Arsenal’s top target, and the Premier League leaders are growing more confident about their chances of closing a transfer.

West Ham have still placed an £80 million price tag on the Englishman’s head despite his precarious contractual condition. But they have grudgingly come to terms with the fact that they will have to offload him this summer.

Rice has a one-year option that West Ham may exercise to keep him with the team until 2025, but the report also says that the Hammers believe this summer may be their last chance to approve a transfer for a premium price.

However, Moyes’ team will under no circumstances consider a January sale as West Ham looks to avoid the drop in the second half of the Premier League season.

Rice has continued to play every minute of Premier League football thus far in the 2022–23 season, contributing one goal and two assists while occupying the centre of the Hammers midfield.

Since making his debut for West Ham in 2017, the midfielder has made 220 appearances across all competitions, totaling 11 goals and 13 assists. During that time, he has helped the London club qualify for the Europa League and Europa Conference League.

Rice told reporters in December that he has made no secret of his goal to play in the Champions League someday.

“One hundred per cent, I want to play in the Champions League.”

“For the last two or three years, I’ve been saying that. I’ve been playing consistently well for my club and I feel like I really want to keep pushing. I see my friends here who are playing Champions League and for big trophies.”

Despite links to Youri Tielemans of Leicester City and Douglas Luiz of Aston Villa during the most recent summer transfer window, Arsenal decided against bolstering their midfield lineup.

The Gunners had up to three deadline-day offers for Luiz rejected before the Brazilian agreed to a new contract with Villa Park, but if the Belgian leaves Leicester at the conclusion of his contract this summer, they might try again for Tielemans.

Danilo of Palmeiras was also hotly pursued by Arsenal, but the 21-year-old is now believed to be close to joining Nottingham Forest.