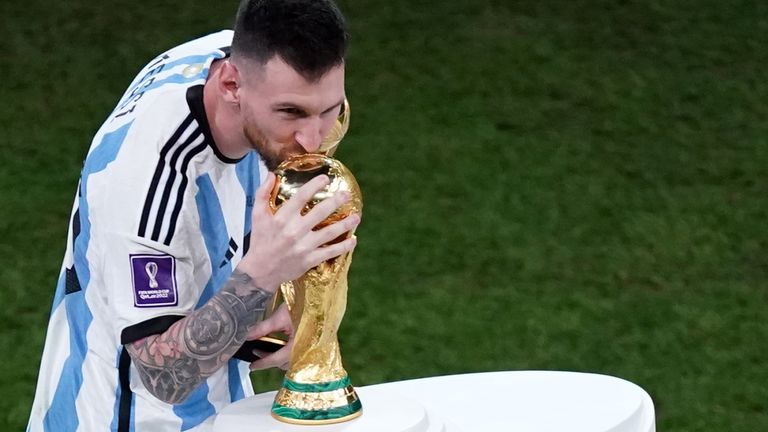 Argentina won their third World Cup title on penalties after a thrilling 3-3 draw at the Lusail Iconic Stadium, holding off a remarkable France comeback.

As Lionel Messi and Angel Di Maria scored in the first half, the South American champions appeared to be cruising to a third World Cup victory with a lacklustre France having no answer for Argentina’s unfettered dominance. But an incredible quick-fire brace from Kylian Mbappe in the closing 10 minutes of play pulled France even and forced extra time, where Messi won his second goal of the game before another Mbappe penalty forced a draw after an exciting 120 minutes.

Kingsley Coman and Aurelien Tchouameni flubbed their lines, but Lionel Scaloni’s charges retained their composure from 12 yards, and Gonzalo Montiel netted the game-winning penalty kick to end the winners of 1978 and 1986’s 36-year absence from another World Cup.

In the current World Cup, France had developed a reputation as a squad content to play it safe and target opponents on the break. However, this tactic was completely unsuccessful against the well-oiled Albiceleste machine.

Scaloni’s team easily won the midfield duel and took control of the game right away, with the recently returned Di Maria wreaking havoc on the left side.

Theo Hernandez gave up possession in the 17th minute, not for the first time in the opening minutes, and the Juventus veteran blasted an effort over the top. Six minutes later, he would make Ousmane Dembele his second victim.

Hugo Lloris was sent the wrong way by Messi’s shot from 12 yards after Di Maria sprinted past Dembele into the penalty area and was carelessly pulled down by the Barcelona player.

A lacklustre France offered no resistance as Messi became the first player to score in the group stage, last 16, quarterfinals, semifinals, and final at a single World Cup.

Argentina gave France a lesson in counterattacking play in the 36th minute when the vivacious Di Maria scored. Messi was substantially involved once more as his cheeky flick found Julian Alvarez.

The Brighton & Hove Albion attacker crossed for Di Maria to shoot over the advancing Lloris and into the far corner of the goal after the Manchester City player unleashed Alexis Mac Allister down the right.

Di Maria came dangerously close to succumbing to emotion as France manager Didier Deschamps substituted Marcus Thuram and Randal Kolo Muani for Dembele and Olivier Giroud. However, Emiliano Martinez managed to make it to halftime without needing to make a single stop.

Whatever instructions Deschamps gave his team at halftime proved futile as Argentina maintained their lead after the restart, thwarting the 2018 champions and putting Lloris to the test with Rodrigo de Paul and Alvarez.

After an hour had passed, Les Bleus finally began to exert some pressure, and in the 71st minute, Kylian Mbappe drifted infield from the left and fired, but the ball harmlessly flew over the crossbar.

Nicolas Otamendi and Cristian Romero dealt with a nonchalant France team quite well, but in the 79th minute, he misjudged the dazzling Kolo Muani and gave up a penalty after taking down the Eintracht Frankfurt forward.

Mbappe stepped up after seeing Argentina’s number 10 convert from the penalty spot, and he narrowly missed beating Martinez, who got a hand on the ball but could only palm the Frenchman’s shot farther into the corner.

Few minutes after scoring his first goal, France’s legendary striker equalised the match for the hosts completely out of the blue. He played a deft one-two with Thuram before launching a thundering volley into the far corner that left the Argentina team in complete disbelief.

Argentine hearts were in mouths when Thuram went over Enzo Fernandez’s trailing leg inside the box in the 87th minute, but the Borussia Monchengladbach player smiled a knowing smile as he was booked for diving. La Albiceleste paid the price for dropping down a gear in an astonishingly quick turnaround in fortunes.

Despite Messi’s best attempts, who late on blasted a vicious long-range shot onto Lloris’ raised glove, no further goals were scored in the eight minutes of second-half injury time as another 30 minutes of nerve-wracking soccer loomed.

In the first phase of extra time, France continued to control the pace, although Les Bleus were grateful to Dayot Upamecano for stopping Lautaro Martinez with a spectacular block in the 104th minute before Raphael Varane headed over Montiel’s follow-up scissor kick.

In the 109th minute, a well-executed passing play resulted in Lloris stopping Martinez’s forceful shot from a tight angle. Messi’s rebound was cleared away by Jules Kounde, but the referee’s blinking watch showed that the ball had crossed the line. Argentina was now in full force.

But in the 27th minute of extra time, Montiel blocked Mbappe’s shot with his arm inside the box, making the 2022 World Cup final even more absurd. From the penalty spot, the Paris Saint-Germain attacker expertly completed his hat trick.

Following one of the most amazing World Cup games in history, the fate of the 18-karat gold trophy would be decided by 12 yards as Emiliano Martinez stopped Kolo Muani one on one and Lautaro Martinez mysteriously sent a free header way wide of the mark in injury time.

Before Martinez dove to his right to save Coman, Mbappe and Messi both scored from 12 yards, and Paulo Dybala comfortably rolled his attempt through the middle to give Argentina the lead right away.

Martinez’s psychological tricks paid off when Tchouameni missed France’s subsequent penalty kick and Leandro Paredes’ shot was too strong for Lloris to stop.

Kolo Muani’s thunderbolt down the middle kept France alive as Argentina was one spot kick away from victory.

To bring delight and jubilant cheers from those wearing blue and white, Montiel coolly sent Lloris in the wrong direction.

Thus, one of the most beautiful finals was destined for Football God’s most loveable son to win the glory in his final World Cup.

N’Golo Kante pushing for Barcelona to offer him a contract