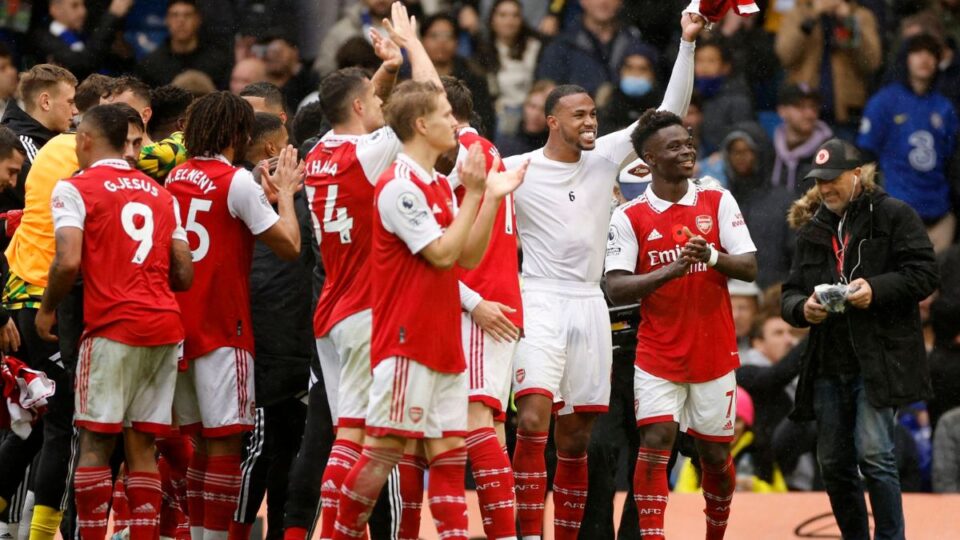 Arsenal defeated Chelsea 1-0 at Stamford Bridge to reclaim first place in the Premier League. Gabriel Magalhaes scored the game’s lone goal to give Arsenal the victory.

After Bukayo Saka’s corner eluded everyone in the Chelsea box in the 63rd minute, the Brazilian center-back pushed home from point-blank range to give the Gunners a well-earned victory.

After winning their third straight match at Stamford Bridge, Mikel Arteta’s team has reclaimed a two-point lead over Manchester City at the top of the league while a lackluster Chelsea has dropped to seventh place and is now 13 points behind their London rivals.

At Stamford Bridge, the first half was marked by several fouls (17 in all), but it was Arsenal who controlled the ball and made inroads. Edouard Mendy was largely unaffected during the first 45 minutes, but Gabriel Jesus blew a wonderful opportunity to give Arsenal the lead.

Gabriel Martinelli’s left-wing cross found Jesus in a tonne of space in the 29th minute after an excellent out-of-back move by Arsenal, but the misfiring striker missed a wonderful opportunity. Jesus should have done much better with that first-half opportunity as he had gone eight games without scoring before the trip to Stamford Bridge,

The only contribution Pierre-Emerick Aubameyang made in the first half against his former team was a late challenge on Ben White in front of Arteta that resulted in an early booking.

The Blues struggle continues as it ended Chelsea 0-1 Arsenal

When Chelsea made one of their rare ventures forward, Kai Havertz was the spark. In the 33rd minute, he struck a low ball into the box, but Aaron Ramsdale quickly descended to stop it.

Thomas Partey’s acrobatic header from an Arsenal corner 11 minutes into the second half went wide, but the Ghanaian had arrived just ahead of Martinelli, who was in a much better position to attempt to break the tie.

Following a brief halt in play for what appeared to be a medical emergency in the fans, Jesus squandered another opportunity for Arsenal in the 62nd minute as Mendy well saved from a tight angle after covering his near post well.

Gabriel scored from close range after Saka’s low corner was missed by a sea of blue shirts. Nevertheless, the ensuing corner eventually resulted in a well-deserved opening goal for Arsenal.

Saka’s corner may have been going in, but Gabriel made sure as the Gunners capitalized on their dominance, and Aubameyang’s wretched afternoon against his former team was quickly over when Armando Broja was inserted.

In the 75th minute, Martin Odegaard could have done much better with a right-footed shot that floated harmlessly over the top after Broja gave Chelsea a boost down the left side. However, as the Blues move broke down, Arsenal immediately counterattack.

Then, in the 80th minute, with Arsenal yelling for a penalty and the ball obviously striking Marc Cucurella’s hand, the hosts’ hearts were in their mouths. However, despite the foul being committed just outside the area, VAR did not award a penalty.

Chelsea appeared to be inspired by that let-off and increased their effort a little in the closing 10 minutes, but Arsenal goalkeeper was flawlessly shielded by his defenders as Graham Potter’s team suffered their second straight league loss.