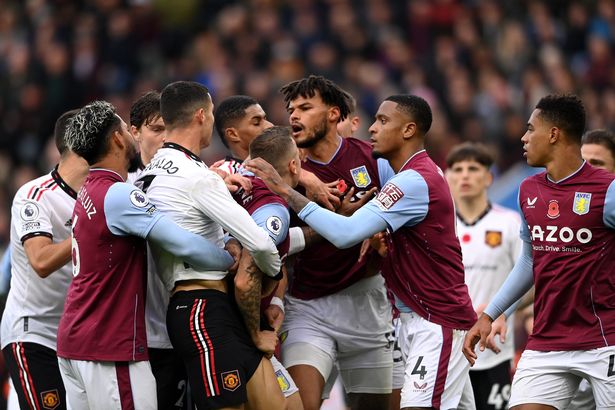 The 20-time English champions, who were outplayed for the bulk of the afternoon, were defeated by Emery’s team, making it the perfect start for the Spaniard. Man United are now in fifth place in the Premier League table, three points behind fourth-place Tottenham Hotspur, while Villa are now in thirteenth place as a result of the remarkable victory.

Leon Bailey received a feed from Jacob Ramsey and broke into a shooting position before skillfully hitting the ball past David de Gea to give Villa the lead seven minutes into the game.

In the eleventh minute, Lucas Digne scored a spectacular free kick past the diving De Gea to give the home team a two-goal lead. At Villa Park, Man United was finding it difficult to get into the game.

Emiliano Buendia missed the crossbar with a shot in the 16th minute, and then Matty Cash missed with a long-range attempt as Villa threatened to score a third.

Alejandro Garnacho and Cristiano Ronaldo, who served as captain in place of Bruno Fernandes, both had shots blocked by Emiliano Martinez as the half went on.

Just before halftime, the Red Devils were able to cut the lead in half when Luke Shaw’s shot deflected off Ramsey and into the goal, surprising Martinez in goal.

As Man United began to exert greater control as the first half came to a close, Villa managed to hold on, but Bailey scored the opening goal of the second period and tested De Gea right away.

After receiving a low cross from Ollie Watkins, Ramsey finished brilliantly to put the home team up three goals in the 49th minute.

Just before the hour, Ronaldo and Tyrone Mings got into a physical altercation inside the Villa box, although neither player was disciplined as a result of the incident.

Martinez outmuscled Anthony Elanga to a high ball inside the Villa box as Man United threatened to add a second goal in the 67th minute. However, Diogo Dalot squandered a golden opportunity 15 minutes from time to gain control.

The Red Devils, however, were unable to rally in time and suffered their first loss in the Premier League since falling behind 6-3 to Manchester City in the Manchester derby. The EFL Cup match between Emery’s club and Man United will take place at Old Trafford the following week.