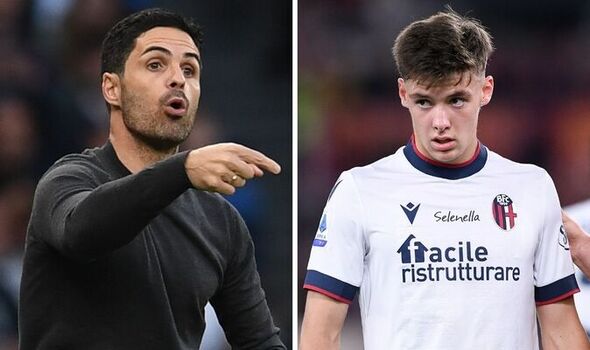 According to a source, Arsenal have received a boost in their pursuit of Bologna left-back Aaron Hickey.

The Gunners were unable to qualify for Champions League football next season and thus they need to upgrade their squad in this summer’s transfer window.

Despite not playing any European contest, Arsenal were unable to find a spot in the Top 4 and lost to their rivals Tottenham, who indeed will play in the UCL next season.

The Gunners were unable to qualify for Champions League football next season and thus they need to upgrade their squad. Despite the fact that Arsenal were not involved in any European competition, the London club failed to finish in the Top 4.

Thus, this simply specifies that the Gunners are in requirement of adding more quality in their current squad. And now they have their eyes on a 19-year-old Scotsman, who has been an important player for the Serie A outfit this season.

Despite being a defender, Hickey scored five goals and provided one assist in 36 league appearances. The youngster can be termed as a wing-back rather than purely considered as a left-back defender.

Mikel Arteta is rumoured to be looking for a new left-back this summer, as Kierney continues to be plagued by injuries. Moreover, Nuno Tavares has failed to live up to expectations at the Emirates Stadium.

Arsenal and Napoli are said to be among the clubs interested in signing Hickey, who has just over two years left on his contract.

However, according to the Evening Standard, Napoli are close to signing Getafe left-back Mathias Oliveira, allowing the Gunners to sign Hickey.

At the moment, Hickey will be looking to add to his two senior Scotland caps when he joins up with the national team ahead of next month’s World Cup playoff.