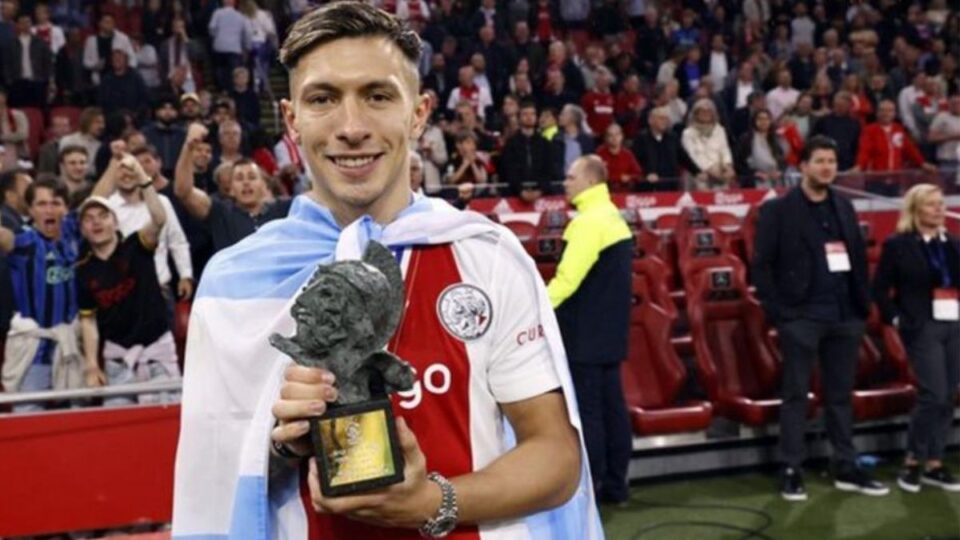 Lisandro Martinez, the centre-back for Ajax, has announced that he is travelling to Manchester to complete his transfer to Manchester United.

The 24-year-old was thought to have been a priority target for the Red Devils after winning the Erik ten Hag Player of the Year award at Ajax in 2021–2022.

The versatile defender was also being courted by Arsenal, who were reportedly pleased with Mikel Arteta’s plans for the North London club.

However, Erik ten Hag, the manager of United, was eager to work with the 24-year-old player again after signing him for Ajax in 2019. The United Chief Executive Richard Arnold and Football Director John Murtough advanced the agreement when they visited Amsterdam last week despite the Dutch club’s reluctance to let Martinez leave.

Martinez prefers to play on the left side of two central defenders, and Ten Hag appeared to be preparing for his arrival when he switched captain Harry Maguire from his usual left-sided position to the right against Melbourne Victory on Friday.

Will Martinez make an appearance for Manchester United in the Pre-Season?

Martinez has travelled to Manchester to complete the transfer’s final details, including a physical and obtaining a visa.

He is unlikely to travel to Australia to participate in United’s current tour and is more likely to reunite with them on their 24 July return to England.

The recruiting team at United has had a hectic few days. While they continue to try to persuade Frenkie de Jong to leave Barcelona for Old Trafford

Eriksen’s three-year contract was announced on Friday, but according to a Metro story, neither Eriksen nor Martinez will board a flight to Australia to continue the team’s preseason tour.

Before meeting the rest of the team upon their return from Oceania, where they thrashed Melbourne Victory 4-1 on Friday, Martinez and Eriksen are said to practise together at Carrington.

The Red Devils also defeated Liverpool 4-0 earlier this week in Bangkok. Before returning to the UK, they will play Crystal Palace and Aston Villa in Australia.

On July 30, Ten Hag’s team will also travel to Norway to take on Atletico Madrid. The next day, the Dutchman will oversee his first home game against Rayo Vallecano.