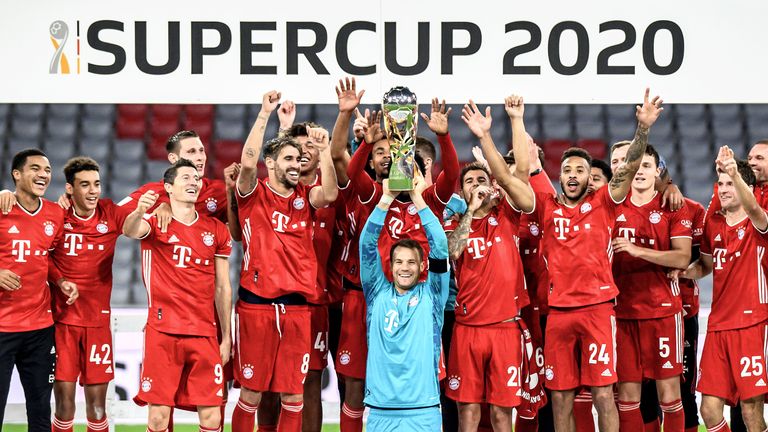 After this win, Bayern is now on cloud nine with Bundesliga, German Cup, UEFA Champions League, and UEFA Super Cup in their kitty in three months. Chances are that they can add a sixth trophy at the Club World Cup in the winter.

Joshua Kimmich’s goal in the 82nd minute clinched it for Bayern Munich after Dortmund battled back from a two-goal deficit in a thrilling match at an empty Allianz Arena.

The German Super Cup is traditionally played between the Bundesliga winners and German Cup victors. As Bayern had claimed those titles, their opponent in this match were league runners-up Dortmund.

“It was not that easy, especially in the second half. We led 2-0 but then made our own life difficult,” said Bayern coach Hansi Flick. Hansi took over last November and has enjoyed a breezing 10 months in charge.

“What counts is that we won the game. Everything else we will need to do better on Sunday [against Hertha Berlin in league play],” he added.

“I’m still a little bit on the happy wave of New York, I would say. Of course, at one point I’m going to get super tired. I guess all the tension and focus on Roland Garros, it’s hiding still the tiredness and everything. I hope I can push it as far as I can.”