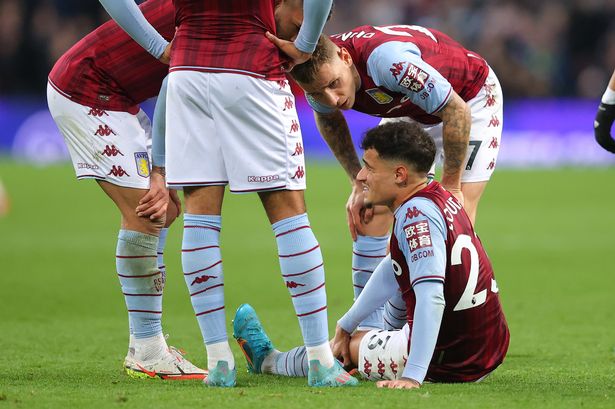 According to reports, Brazilian and Aston Villa striker Philippe Coutinho will miss the 2022 World Cup due to a significant thigh injury. The 30-year-old was conspicuously absent from the Lions’ 3-1 victory over

Manchester United in Unai Emery’s first match in charge at Villa Park. Coutinho acquired the muscular injury during the game, and Emery told Birmingham Live that he wouldn’t play for Villa again before the World Cup break.

“Coutinho is injured. I don’t know how long it will be but, today, he couldn’t play and he’s not going to play until after the break.

“It’s a muscular injury. He’s not going to play on Thursday or Sunday because he’s injured and he’s out longer,”

Emery appeared to confirm that Coutinho wouldn’t be available for Brazil during the World Cup, but the Daily Mail now asserts that the former Liverpool and Barcelona player won’t be competing.

According to the sources, Coutinho injured his quadriceps while working out, and it may take him up to 10 weeks to fully recover, keeping him out till 2023. In the best-case scenario, Coutinho may return to action in about seven weeks, possibly making his comeback on Boxing Day against old side Liverpool.

With Brazil manager Tite scheduled to announce his team on Monday, the attacker will now almost certainly not be chosen for the World Cup, but regardless, a call-up would have been difficult given his troubles at Villa Park.

After signing on loan from Barcelona in January, Coutinho reconnected with Steven Gerrard in the West Midlands, where he produced five goals and three assists in 19 appearances during his rookie campaign.

The 2022–23 season has been more disappointing for the South American after being formally signed in the summer. He has gone 13 games across all competitions without scoring or providing an assist.

While only making six Premier League starts for Aston Villa this season, Coutinho has racked up 21 goals and 11 assists in 69 appearances for Brazil, who he will represent at the 2018 World Cup despite being left off the roster for the tournament in 2014.

As Emery’s tenure as manager got off to a winning start without Coutinho, Aston Villa scored goals against Manchester United through Leon Bailey, Lucas Digne, and Jacob Ramsey.

Following their 3-1 victory on Sunday, the West Midlands club is now ranked 13rd in the Premier League. They will play Man United once more on Thursday in the third round of the EFL Cup.

Before the World Cup, Emery’s team plays Brighton & Hove Albion. Brazil will play Serbia, Switzerland, and Cameroon in Group G; they will begin their campaign against the latter on November 24.