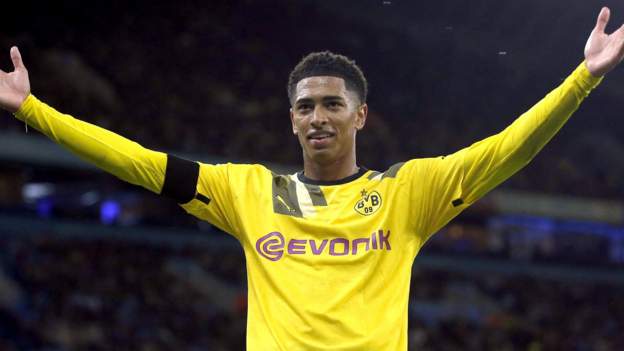 According to reports, Chelsea has joined Manchester United and Liverpool in the fight to recruit Borussia Dortmund midfielder Jude Bellingham. Since joining the Bundesliga club from Birmingham City in 2020, the 19-year-old has taken his game to new heights, and he has distinguished himself as one of Europe’s most promising young players.

In 99 appearances for BVB in all competitions, Bellingham has scored 13 goals and provided 18 assists, including one in the 2-1 Champions League loss to Manchester City on Wednesday.

Although the England international still has three years left on his Westfalenstadion contract, rumours about his future employment are persistent. One recent source asserts that Man United are in a strong position to recruit the midfielder, who is valued at £100 million, while another suggests that Liverpool are now in the lead in the fight to get him.

The Sun reports that Premier League rivals Chelsea are planning a high-profile bid for the teen next summer, putting both clubs in competition. The West Londoners spent the most money during the most recent transfer window, bringing in nine players for a total of more than £250 million.

Does Chelsea have a chance to lure in the services of Jude Bellingham next summer?

Bellingham is now one of the objectives for the American billionaire, and newly-appointed head coach Graham Potter is rumoured to be a fan of the midfielder.

Chelsea’s transfer record, which now stands at the £97.5 million they paid for striker Romelu Lukaku just over a year ago, would surely be broken if they made a move for Bellingham.

Although Bellingham has recently been asked about his future and the possibility of going back to England, the kid claims that he has not given any consideration to leaving Dortmund in the near future.

“First of all, I’m here to help Borussia Dortmund win the game. If I can play well and showcase my talents, it is a bonus.”

“But I’m here to win for Borussia Dortmund and I’m very happy here at the minute and I’m focused on all of the goals we have as a team and I’m not looking past that.”

“The club have done loads for me and made me feel very welcome since I first came and gave me the opportunities to develop even further.”

“To look past that and into the future would be disrespectful. It’s not something I am thinking about, to be honest.”

Before joining Gareth Southgate’s England team for the upcoming international break, Bellingham is scheduled to play for Dortmund against rival Schalke 04 in the Revierderby on Saturday. The Three Lions will play Italy and Germany in their final two UEFA Nations League games in League A Group 3 after the break.