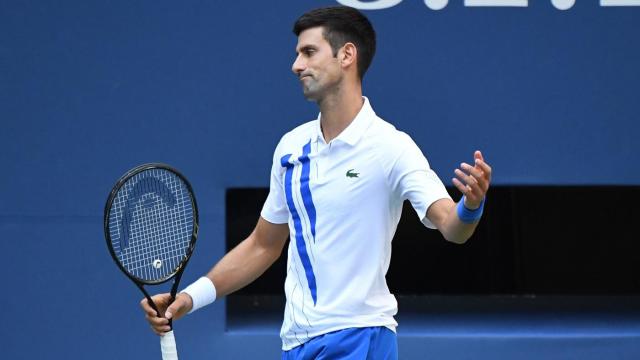 The world no. 1 Novak Djokovic was defaulted on Sunday after he struck a line judge with a ball. So, rather than moving closer to Roger Federer in the Grand Slam record books, Djokovic found himself drifting away from it.

Djokovic wasn’t aiming at anyone but it hit the line judge, seemingly near the face, and she fell to the ground.

At first, Djokovic and chair umpire AurelieTourte went to check on her, and soon after they were joined by tournament referee SoerenFriemel and supervisor Andreas Egli in the center.

After a protracted conversation with Friemel, Djokovic was officially defaulted from the tournament. After this, the 17-time grand slam champion walked off the court. The stands were empty due to the coronavirus pandemic and there was no cacophony as he walked away. He left the tournament site without speaking to the media. He appeared very morose while leaving the court.

Djokovic took to Instagram and apologized for the whole episode.

“This whole situation has left me sad and empty,” he wrote. “I checked on the linesperson and the tournament told me that thank God she is feeling ok. I’m extremely sorry to have caused her such stress. So unintended. So wrong. I’m not disclosing her name to respect her privacy. As for the disqualification, I need to go back within and work on my disappointment and turn this all into a lesson for my growth and evolution as a player and human being.”

The incident has now drawn mixed reactions with many feeling sorry for the tennis great of modern times.