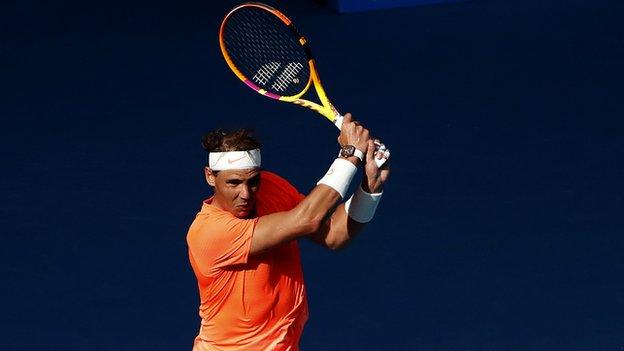 World number two Rafael Nadal sailed into the last eight of the Australian Open on Monday drubbing Fabio Fognini in their fourth round tie. For Nadal, it would be his 13th sojourn in the quarters at the Grand Slam he won in 2009.

“When you go on court against Fabio, you worry,” said Nadal after the match.

“There can always be problems. I was just lucky that when he broke me (in the second set) I responded immediately and held the score. Today was very humid and quicker during the day, which I like, but I have to adapt to every condition,” Nadal added.

34-year-old Nadal, if he wins the Grand Slam, will be the first man in the Open Era to bag each of the four major championships on two or more occasions.

He will next lock horns with fifth-seeded Greek Stefanos Tsitsipas, who earned a walkover after No. 9 seed Matteo Berrettini of Italy withdrew due to an abdominal strain.

Earlier in the day, fourth seed Daniil Medvedev also secured his place in the last eight after a convincing straight-sets win over Mackenzie McDonald.

Medvedev trounced the 25-year-old American 6-4, 6-2, 6-3 in his fourth-round match that lasted an hour and 29 minutes at the Margaret Court Arena. Up next, Medvedev will face Andrey Rublev in what can be termed a blockbuster quarter-final clash on Wednesday.

Australian Open event saw a lot of drama as emotions ran high ever since international players landed in Australia. Followed by hard quarantine protocol leaving very less time to practice, players like Djokovic and others vehemently criticized the organizers. Even this week, matches are played in empty stadiums after a strict lockdown has been imposed for at least a week.