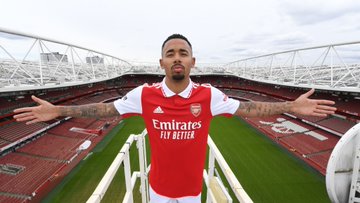 Brazilian attacker Gabriel Jesus has been acquired by Arsenal on a long-term contract for £45 million from Manchester City. The 25-year-old joins Marquinhos, Fabio Vieira, and Matt Turner as the fourth player to join the Gunners during this summer’s transfer window.

As a result of Alexandre Lacazette’s departure on a free transfer and subsequent return to Lyon, the number nine shirt at Arsenal has been given to Jesus. Jesus only had a year left on his deal with Man City, and it’s said that before moving to the Emirates, Spurs, Chelsea, and Juventus were also interested in signing him.

“We are delighted that we have secured the transfer of Gabriel. Everyone who knows football well, knows the qualities of Gabriel Jesus,”

“Gabriel is a player who we have admired for a long time now. He is 25 years old and an established Brazil international who has consistently demonstrated that he is a player at a very high level.

“We look forward to seeing him join up with his new teammates ahead of the new season. We all welcome Gabriel to Arsenal.”

How will Gabriel Jesus fit Into Arsenal squad?

Meanwhile, Jesus and Kevin de Bruyne each contributed eight assists to league goals for Manchester City in 2021–22, which is a club record. After finishing fifth in the Premier League and losing out on Champions League qualification last season, Jesus joins a team looking to enhance their goalscoring. He said he spoke to Arteta about “the club, the players, the project and the future” before the move. Given that they collaborated at Manchester City, Mikel Arteta is aware of what Gabriel Jesus may expect from him.

After moving from Palmeiras to the Etihad in January 2017, Jesus spent the next five and a half years amassing 95 goals and 46 assists in 236 games for Pep Guardiola’s team.

Jesus assisted Man City in winning four Premier League championships, four EFL Cups, one FA Cup, two Community Shields, as well as making it all the way to the Champions League final in 2020–21.

The Brazilian international is rumoured to have inked a deal worth around £220,000 per week, making him the highest-paid Gunner for the 2022–23 campaign.

Later this month, Jesus will begin preseason practise with his new teammates as the Gunners get ready for their first official friendlies against Nurnberg on July 8 and then their journey to the United States for the Florida Cup.

The striker might don an Arsenal uniform for the first time at the Emirates Stadium on July 30 against Sevilla in an Emirates Cup match before the Gunners face Crystal Palace to open their Premier League campaign on August 5.

Australia keen on defeating India on their home ground next year