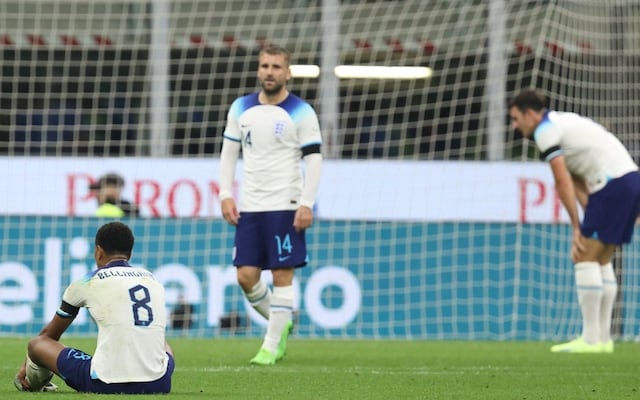 After falling to Italy 1-0 in a dull match at San Siro, England was demoted to League B in the UEFA Nations League.

Giacomo Raspadori’s goal in the 68th minute effectively ended Gareth Southgate’s team’s chances of winning in League A Group 3. Additionally, the Three Lions’ World Cup preparations took yet another knock as the European champions put an end to their shot-shy offensive.

Nick Pope was selected in goal over Aaron Ramsdale for a much-maligned England starting lineup, while players like Eric Dier, Harry Maguire, and Bukayo Saka were all given starts at San Siro.

In the early going, neither team displayed any inventiveness, though West Ham United’s Gianluca Scamacca managed to outmuscle Maguire at the back post and force Pope to make a save with his header.

In the early going, Roberto Mancini’s team hustled and harassed England without really putting Pope to the test, but after having more possession, England also found it difficult to work Gianluigi Donnarumma.

With the score at 0-0 at the break on Friday, it was the fifth straight game that England had failed to score in the opening period of play, tying a wasteful streak from back in 1985.

Saka, who earlier on Friday was selected England’s Men’s Player of the Year for 2021–22, was finding it particularly difficult to adjust to playing as a left wing-back as Italy remained relatively unthreatened by the Three Lions.

Harry Kane, the captain of Tottenham Hotspur, was injured in a collision with Rafael Toloi early in the second half, drawing blood, but he was able to return to the field of play.

Before Kane had a chance to pose a threat to Donnarumma, Italy carved their way through the Three Lions’ backline. Federico Dimarco’s attempt from close range went just wide, but in any case, Nicolo Barella was offside.

By the third quarter, Southgate was still confident in the starting lineup of 11, but it was the defending European champions who finally broke through in the 68th minute. A long ball over the top from Leonardo Bonucci found Raspadori’s boot, who deftly brought the ball down from just inside the box after getting through Kyle Walker’s right side.

The Napoli forward had plenty of time and space to unleash a powerful drive since England had failed to close him down adequately on the edge of the box, giving Pope no chance.

With just a few seconds left, Jude Bellingham’s looping header over the top put an end to England’s last-chance saloon. The team was unable to rally back into the game and was thus demoted to League B.

The Three Lions will only play for pride against Germany at Wembley on Monday since they are one of just two sides in the 2022–23 Nations League without a goal scored other than on a penalty kick, along with San Marino.