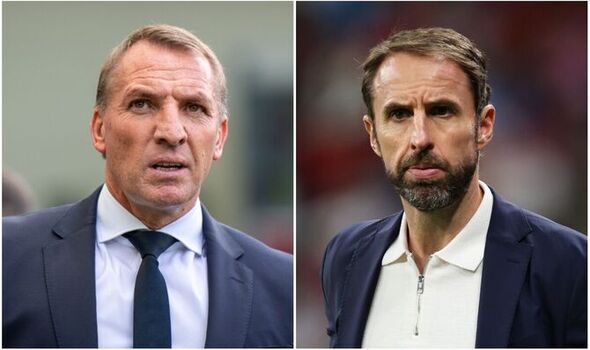 If Gareth Southgate decides to leave his position, it is said that England will look at contacting Brendan Rodgers, the manager of Leicester City.

The Three Lions were eliminated from the 2022 World Cup after a sad 2-1 loss to the reigning champions France on Saturday, and Southgate has been tight-lipped on his future as head coach.

The 52-year-old stated, when talking to reporters after the match:

“Emotionally you go through so many different feelings. The energy it takes through these tournaments is enormous. I want to make the right decision, whatever that is for the team, for England, for the FA.”

“I’ve got to be sure whatever decision I make is the right one. I think it’s right to take time to do that because I know in the past my feelings have fluctuated in the immediate aftermath of tournaments.”

The Three Lions have advanced to the 2018 World Cup semifinals, the Euro 2020 final, and the 2022 World Cup quarterfinals under Southgate, who has 81 games remaining on his contract through the end of 2024.

The Daily Star claims that he would reportedly announce his resignation as manager at a meeting with FA chief executive Mark Bullingham in the new year.

According to the article, Bullingham is determined to maintain Southgate as England manager and intends to tempt him by increasing his pay significantly.

If a position with the national team or a Major League Soccer team in the United States were to tempt Southgate to leave England, the FA is claimed to have selected Leicester manager Brendan Rodgers as a prospective replacement.

Bullingham had expressed interest in hiring an English manager, but Graham Potter has only recently taken over at Chelsea, while managers like Steven Gerrard, who is currently unemployed after being fired from Aston Villa, and Frank Lampard of Everton have been deemed “not good enough” at this point in their careers.

The FA is keeping an eye on Eddie Howe as well, but they are aware of the project he is now working on at Champions League contender Newcastle United and understand it would be challenging to convince him to leave St James’ Park.

This leaves Northern Irishman Rodgers, 49, who is under contract at the King Power Stadium through the summer of 2025, for consideration by the FA as the next England manager.

Since taking over at Leicester in 2019, Rodgers has established a reputation for developing young players. Earlier this season, though, Rodgers’ job security was in doubt due to Leicester’s shaky start to the Premier League season.

The Foxes have now reversed their fortunes, winning four of their last five league games to climb up to 13th position in the table and four points clear of the relegation zone before the World Cup break.

With Leicester, Rodgers won the FA Cup and the Community Shield in 2021. The previous year, he also led the team to the semifinals of the Europa Conference League.

The FA is rumoured to be open to hiring a manager from outside the UK, and candidates like Thomas Tuchel and Mauricio Pochettino are thought to be on their radar.