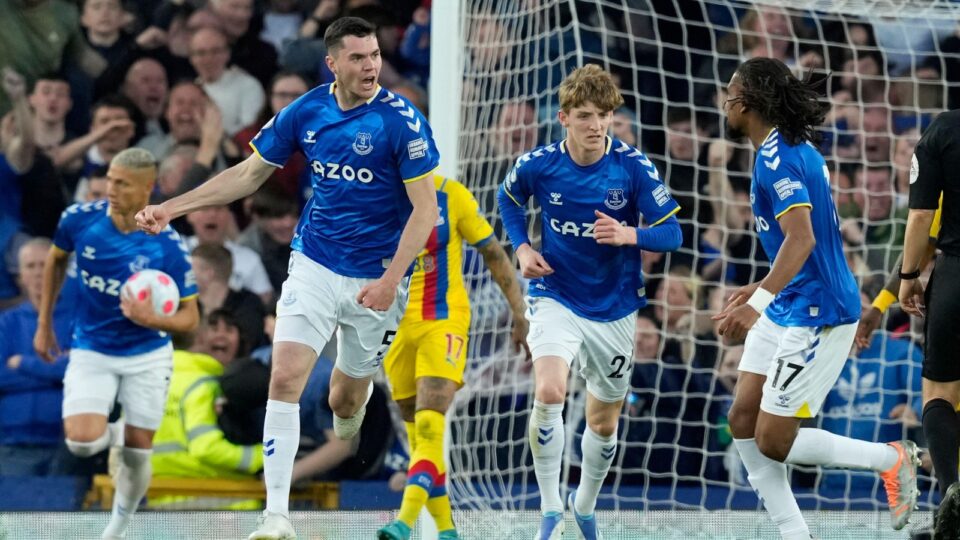 Everton secured their Premier League survival on Thursday evening after defeating Crystal Palace 3-2 at Goodison Park. After goals from Jean-Philippe Mateta and Jordan Ayew in the first half for Patrick Vieira’s side, the Toffees were 2-0 down at halftime.

However, the Blue side of Merseyside put on a comeback show to confirm their survival in the Premier League this season.

Everton had never come back from a two-goal deficit at halftime in a Premier League game before, but they did so against the Eagles.

With a spectacular volley from Mason Holgate’s knockdown, defender Michael Keane halved the deficit just nine minutes into the second half. Richarlison diverted in a deflected shot past Jack Butland, bringing the game back to level terms.

Dominic Calvert-Lewin powered in a header from Demarai Gray’s brilliant free-kick pass only five minutes from time to complete the amazing comeback. This ensured igniting joyous scenes with fans swarming the ground at the final whistle. Frank Lampard’s side are currently four points clear of both Burnley and Leeds United ahead of their last game of the season on Sunday at Arsenal.

The Merseyside club holds the record for the most top-flight seasons in English football (117). Everton have only missed being a part of the league on 4 occasions, the most recent being the 1953-54 season.

“It is easy to say ‘but you haven’t won anything’. You know what, come and work at this club for a few months and see the difficulties and what it means to people to stay in this league. They have pulled us over the line, they have been more than a 12th man. But the players also deserve huge credit. An amazing night.”