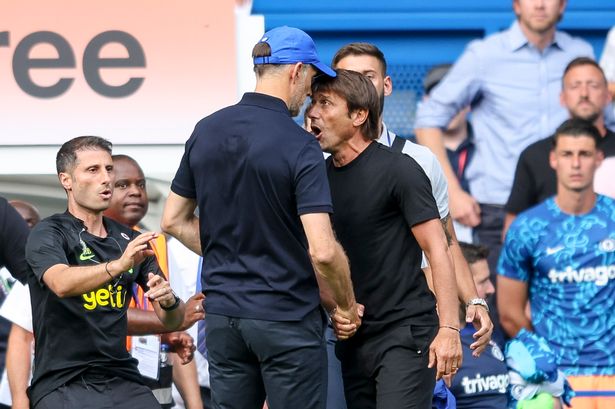 The FA has charged both Chelsea manager Thomas Tuchel and Tottenham Hotspur manager Antonio Conte following their altercation at the conclusion of Sunday’s 2-2 Premier League match.

After Pierre-Emile Hojbjerg overturned Kalidou Koulibaly’s opening goal, the Blues manager did not appreciate Conte’s celebrations, and the two had to be separated on the sidelines.

When Reece James gave Chelsea the lead again, Tuchel continued to march down the side of the field past a defeated Conte. However, Harry Kane came up with a last-second equaliser for Tottenham.

At the final whistle, the two managers got into another altercation because Tuchel wouldn’t let go of Conte’s hand. Many staff members had to intervene to end the incident as it looked likely to turn into a physical battle.

Following their subsequent red cards for engaging in “improper behaviour,”  Tuchel and Conte have now been charged with violating FA Rule E3, according to the FA.

“Thomas Tuchel and Antonio Conte have both been charged with a breach of FA Rule E3. Following the Premier League fixture between Chelsea FC and Tottenham Hotspur FC on Sunday 14 August 2022,”

“It is alleged that the behaviour of both managers was improper following the end of the fixture. Thomas Tuchel and Antonio Conte have until Thursday 18 August 2022 to provide their respective responses.”

Conte and Tuchel expressed their opinion after the match

Although Conte emphasised that he would always “fight violence with aggression” if the occasion called for it. However, both the managers downplayed the incident after the game.

“If I see aggression then my answer is aggression,”

“It’s not so important. The most important thing is football and to speak about football. It was an intensive game.”

“Honestly the referee showed me a red card but he didn’t understand the dynamic of what happened, but ok I have to accept but I repeat it’s not a big problem. The problem is between me and the other coach, not with the referee.”

Tuchel felt wronged twice before both of Spurs’ goals that day, including a perceived foul on Kai Havertz that went unpunished before Hojbjerg tied the game.

“I thought when you shake hands that you look into each other’s eyes. Antonio had a different opinion. It was emotional. He was happy when he equalised, things got a bit heated, nothing big,”

“If we meet, we meet. If not, not. It’s not a problem. It’s a football match, come on guys. Between men, two competitors, nothing bad happened.”

Before the corner that led to Kane’s equaliser, Cristian Romero then appeared to drag Marc Cucurella to the ground by his hair, but the German cut a composed figure after the match.

When Spurs play Wolverhampton Wanderers on Saturday at noon, Conte will begin his touchline suspension; Chelsea’s next match is on Sunday when they visit Leeds United.